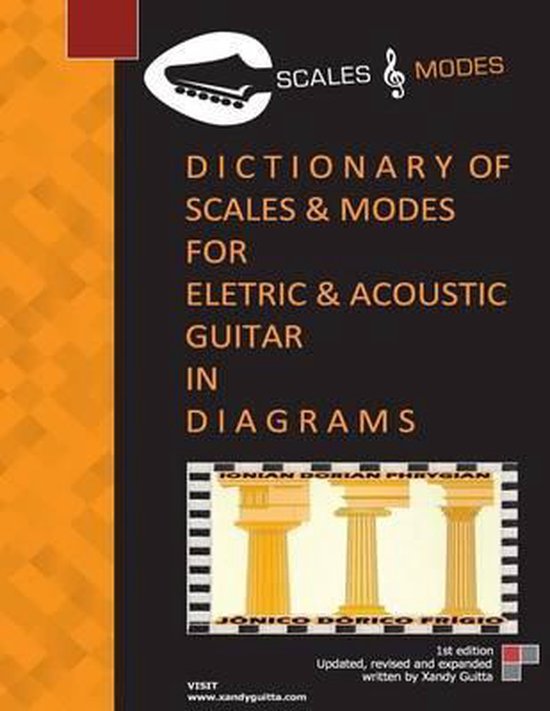 DICTIONARY OF SCALES AND MODES FOR ELETRIC AND ACOUSTIC GUITAR IN DIAGRAMS To start with, this dictionary of learning in diagrams, which the goal is to provide a practical routine, concomitantly offer an organized information to be learned and related to the experiences that each student has already knows. Diagrams are easy-to-understand the fingering pattern in the application of the scales and chords together with their respective triads and tetrads. Altogether, i want to show you that the church modes should be used in a clear way an how they are important to improvisation and composition. Likewise, it is important to understand the order of modes as if they were a alphabet because each mode has got a "different sound." In the meantime, each chord is related with the first step of a major scale and every scale is a "different fingering" of it, they just start on "different positions" in the freatboard. Also, beyond the technique, picking we will see the "non melodic exercices" functioning as "warm-up" together with other scales. For instance, pentatonic scale, blues scale, exotic scales, modes of natural minor scale, modes of melodic minor scale, modes of harmonic minor scale, bebop scales, symmetrical scales and finally the chromatic pentatonic scale. All in diagrams All in all, this dictionary does not teach music theory but i do recommend the music notation. On the whole it goes without saying that students who are interested in becoming a musician should obtain a knowledge of diagrams, scores and tablature to be proficient. DIAGRAM I-GRAPHIC DIAGRAM DIAGRAM II-"NON MELODIC EXERCICES": The purpose of these exercices is the "right-left-hand synchronization" so that the diagram fingering brings "pick-and-finger-independence," technique, creating a combination between them. This is an exercice for both hands. These exercices will develop your technique a little faster because they involve the use of large repetition time and time again through alternate picking, downstrokes and upstrokes. DIAGRAM III- CHURCH MODES: Ionian, Dorian, Phrygian, Lydian, Mixolydian, Aeolian and Locrian. Arising from Ancient Greece, their names were Ancient Greeks, Church Modes, Authentic Modes, Plagal modes, explaining that the modes are divided into: Majors (Ionian, Lydian and Mixolydian) and Minors (Dorian, Phrygian, Aeolian and Locrian) . Also, an extra section about modal and tonal harmony. DIAGRAM IV- PENTATONIC SCALE: 3 note-per-string-sequences. DIAGRAM V-BLUES SCALE: 3 fingering patterns. DIAGRAM VI - EXOTIC SCALES: Phrygian Major, Phrygian Minor, Harmonic Minor Scale Oriental, Gypsy Major, Gypsy Minor (Hungarian Minor), Chinese, Japanese In Sen, Hirojoshi, Kumoi and Mongolian. DIAGRAM VII- MODES OF NATURAL MINOR SCALE DIAGRAM VIII - MODES OF MELODIC MINOR SCALE: (Melodic Minor), Dorian b2, Lydian #5 (Lydian Augmented), Lydian b7 (Lydian Dominant), Mixolydian b6 (also called Hindu), Aeolian b5 (Locrian #2) and Super Locrian (also called Altered Scale). DIAGRAM IX - MODES OF HARMONIC MINOR SCALE: (Harmonic Minor), Locrian Natural 6, Ionian #5, Dorian #4, Phrygian Major, Lydian #2, ALT bb7 ( Mode 7 Harmonic Minor). DIAGRAM X - BEBOP SCALES: Bebop Major, Bebop Dorian, Bebop Dominant, Bebop Locrian #2. DIAGRAM XI- SYMMETRICAL SCALES: The Diminished Scale (Whole - Half Diminished) with 3- note-per- string sequences, 2-note per-string sequences and one of passage, The Dominant Diminished Scale (Half- Whole Diminished ) with 3- note- per- string sequences, Whole Tone Scale with 3 fingering pattern, Chromatic Scale and Augmented Scale. DIAGRAM XII- CHROMATIC PENTATONIC SCALE