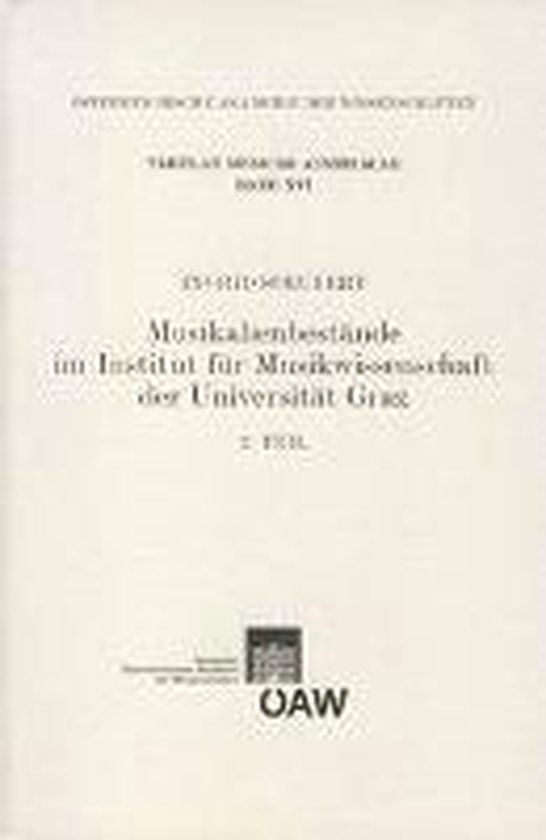 The first volume of the music collection catalogue of the Institute of Musicology, Karl-Franzens-University in Graz published the smaller parts of its collection (items from the parishes of Frohnleiten, Krieglach, Rottenmann and Weiakirchen, the former Piarist cloister of Gleisdorf, the monastery of the "Barmherzige Bruder" in Graz, the former theatre society of Radkersburg, as well as the collection of Friedrich Wastian). The second volume now includes the church music that is still extant from the old Stadtpfarrkirche St. Jakob in Leoben, as well as the manuscripts of the Institute of Musicology that were not catalogued as separate collections. For the most part, these are single sheets of music. Only four complete collections are included: the collection of Johann Khunt (1859-1931), a descendant of a family from Usti nad Orlici who were textile workers and canvas merchants who traded in Graz. This collection, which stems from the period between 1792 and 1860, also originates from Usti nad Orlici, the manuscripts having for the most part been written by members of the "Cacilienverein." The estate of Rosa Kosjek (1847-1931), who is primarily known as a patron of the arts and the conductor of the Kosjek Choir, includes quite an extensive collection with several autograph manuscripts of Berta Luschin von Ebengreuth (1871-1955). The two remaining music collections are smaller and include the autograph manuscripts of Anna von Buttler (Zichy)-Stutenberg (1821-1912) as well that of the Wustner educator family from Carinthia.