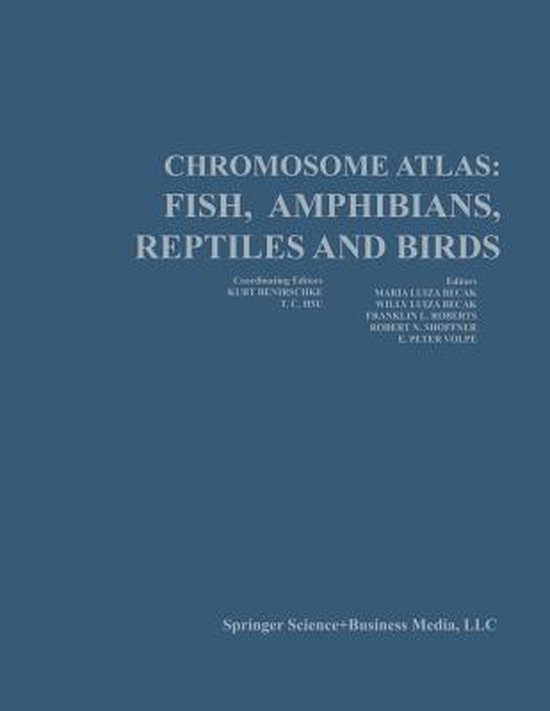 Since the publication of the first Atlas of Mammalian Chromosomes in 1967 the continuous compilation of mammalian karyotypes has become a useful instrument in cytologic and taxonomic studies. Technical advances in preparing mitotic cells from nonmammalian vertebrates have since allowed a better comparison of taxa in fishes, amphibia, reptiles, and birds. In these fields the literature is also widely scat tered; and it has become difficult to survey such information, published as well as unpublished, by nonspecialists. These were among the reasons for the new endeavor of compiling a chromosome atlas for nonmammalian vertebrates. An annual publication is planned with presentation of between 10 and 15 karyotypes from each class. In this second volume, 52 species are presented. For convenience in future colation, the numbering system employs class abbreviations, viz. , P-Pisces, Am-Amphibia, R-Reptilia, and Av-Aves. Within each class, the numbers are necessarily consecutive. In general the karyotypes are laid out following the format employed in An Atlas of Mammalian Chromosomes. Whenever possible both sexes are represented, even though sexual chromosomal dimorphism is not (currently) evident. When the sex chromosomes are known, they are so indicated by conventional nomenclature (XX/XY or ZW /ZZ). In the karyotypes of birds the so-called microchromosomes are grouped together at the end without an attempt at complete enumeration, which is presently impossible. They are usually considered as acrocentrics, but a few are distinctly biarmed.