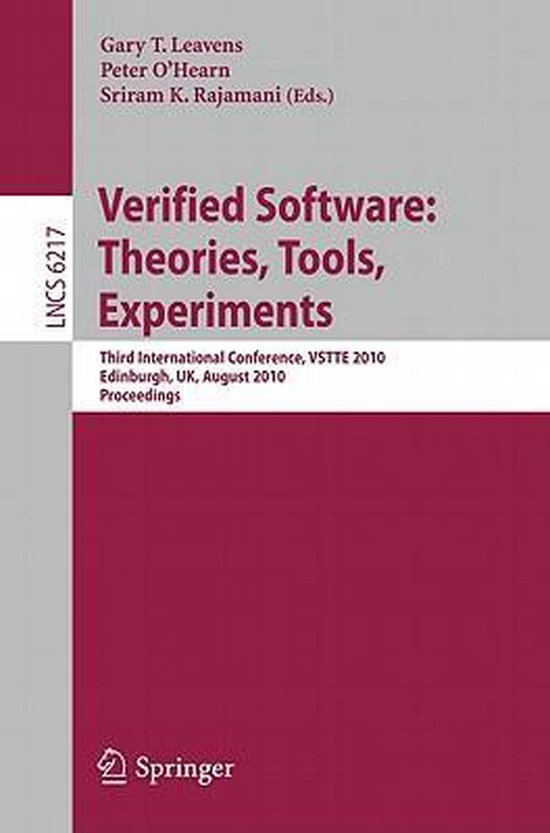 Veri?ed Software: Theories, Tools and Experiments, VSTTE 2010, was held in Edinburgh, Scotland during August 16-19, 2010. This conference is part of the Veri?ed Software Initiative (VSI), which is a 15-year international project that focuses on the scienti?c and technical challenges of producing veri?ed software. Previous VSTTE conferences were held in Zurich, Switzerland (in 2005) and Toronto, Canada (in 2008). The goal of VSTTE 2010 was to advance the state of the art in the science andtechnologyofsoftwareveri?cationthroughtheinteractionoftheorydevel- ment,toolevolution,andexperimentalvalidation.Theacceptedpapersrepresent work on veri?cation techniques, speci?cation languages, formal calculi, veri?- tion tools, solutions to challenge problems, software design methods, reusable components, re?nement methodologies, and requirements modeling. Several of the accepted papers also presented case studies, either in response to published challenge problems or problems of practical interest. Many of the papers were also concerned with concurrent programs. Asspeci?edinthecallforpapers,authorssubmitted15-pagepaperselectr- ically. The EasyChair system handled submissions and was used to manage the reviewing of papers and subsequent discussion. This system aided the Program Committee in avoiding con?icts of interest during the reviewing and discussion process. There was electronic discussion among the Program Committee m- bersaboutthemeritsofeachsubmission,moderatedbytheProgramCommittee Co-chairs. This year the conference received 32 submissions, of which 11 were accepted, for an acceptance rate of about 34%. Seven of the accepted papers were - authored by members of the Program Committee. We were pleased to have invited talks by Tom Ball, Gerwin Klein, and Matthew Parkinson.The authorsof these invitedtalks also graciouslyconsented to the publication of accompanying invited papers in this volume.