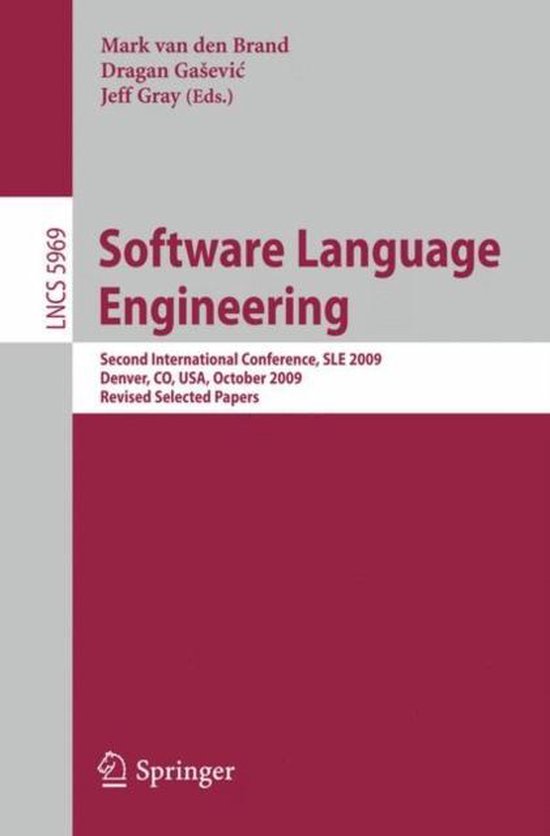 We are pleased to present the proceedings of the Second International Conf- ence on Software LanguageEngineering (SLE 2009). The conference was held in Denver, Colorado (USA) during October 5-6, 2009 and was co-located with the th 12 IEEE/ACM International Conference on Model-Driven Engineering L- th guages and Systems (MODELS 2009) and the 8 ACM International Conf- ence on Generative Programming and Component Engineering (GPCE 2009). TheSLEconferenceseriesisdevotedtoawiderangeoftopicsrelatedtoarti?cial languages in software engineering. SLE is an international research forum that brings together researchers and practitioners from both industry and academia to expand the frontiers of software language engineering. SLE'sforemostmissionis to encourageand organizecommunicationbetween communities that have traditionally looked at software languagesfrom di?erent, more specialized, and yet complementary perspectives. SLE emphasizes the f- damental notion of languages, as opposed to any realization in speci?c technical spaces. In this context, the term software language comprises all sorts of - ti?cial languages used in software development, including general-purpose p- gramming languages, domain-speci? c languages, modeling and meta-modeling languages, data models, and ontologies. Software language engineering is the application of a systematic, disciplined, quanti?able approach to the devel- ment,use,andmaintenanceoftheselanguages. TheSLEconferenceisconcerned with all phases of the lifecycle of software languages; these include the design, implementation, documentation, testing, deployment, evolution, recovery, and retirement of languages. Of special interest are tools, techniques, methods, and formalisms that support these activities. In particular, tools are often based on, or automatically generated from, a formal description of the language.