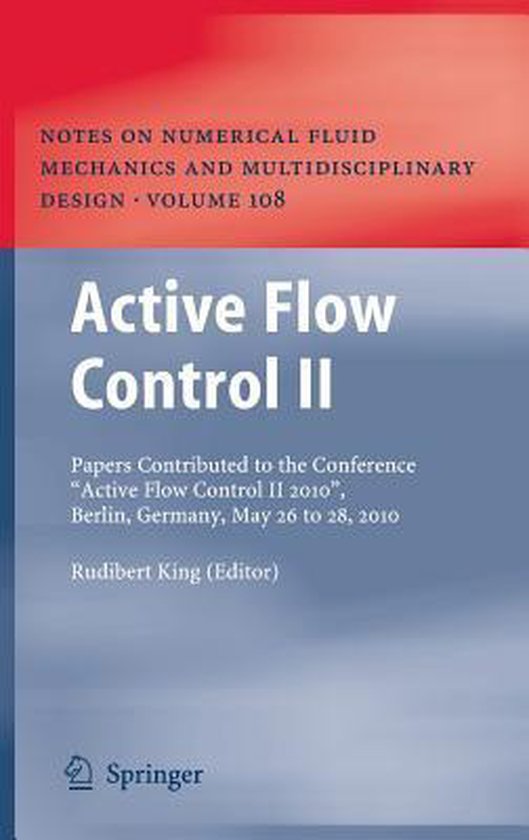 The interest in the field of active flow control (AFC) is steadily increasing. In - cent years the number of conferences and special sessions devoted to AFC org- ized by various institutions around the world continuously rises. New advanced courses for AFC are offered by the American Institute of Aeronautics and Ast- nautics (AIAA), the European Research Community on Flow, Turbulence and Combustion (ERCOFTAC), the International Centre for Mechanical Sciences (CISM), the von Karman Institute for Fluid Dynamics (VKI), to name just a few. New books on AFC are published by prominent colleagues of our field and even a new periodical, the 'International Journal of Flow Control', appeared. Despite these many activities in AFC it was felt that a follow-up of the highly successful 'ACTIVE FLOW CONTROL' Conference held in Berlin in 2006 was appropriate. As in 2006, 'ACTIVE FLOW CONTROL II' consisted only of invited lectures. To sti- late multidisciplinary discussions between experimental, theoretical and numerical fluid dynamics, aerodynamics, turbomachinary, mathematics, control engineering, metrology and computer science parallel sessions were excluded. Unfortunately, not all of the presented papers made it into this volume. As the preparation and printing of a book takes time and as this volume should be available at the conf- ence, the Local Organizing Committee had to set up a very ambitious time sch- ule which could not be met by all contributors.