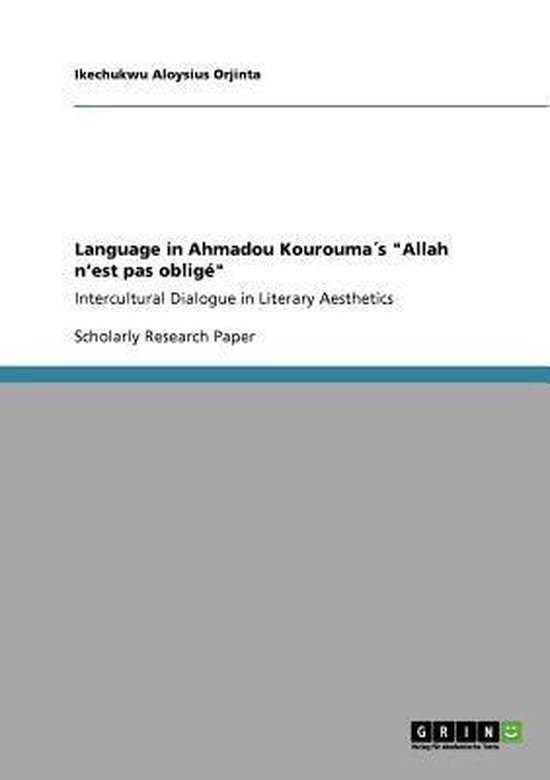 Scholarly Research Paper from the year 2011 in the subject French - Literature, Works, grade: -, LMU Munich (Fakultaet fuer Sprach- und Literaturwissenschaften), course: French - Pedagogy, Didactics, Literature Studies, language: English, abstract: This approach may at first sight appear like a linguistic revolt or rebellion since it distorts and massacres the French vocabulary and grammar. The goal of Ahmadou Kourouma and his colleagues is to prove that the French language cannot open up the African Weltanschauung (World view). The truth is simply that the structure of the French language fails to describe and express the African thought. This is exactly what the Canadians, the Swiss and the Belgians observed that made them invent Canadian French, Swiss French, and Belgian French. Elsewhere in European Studies I have advocated this intercultural dialogue in German Studies (Germanistik and Interkulturelle Germanistik) as a way out in the poor performance of the dissemination of German language, literature and culture. Even in English, we have the Queens English, the American English and the African pidgin English. Africans can as well have African French. Each writer faced with the realities of myriads of African misery: Colonialism, slavery, neo - colonialism, civil and religious wars, cannot afford the luxury of l'Art pour l'Art. Ahmadou Kourouma has to use the French language to mobilize his people for a way forward. He needed to bear a genuine testimony to the situation of his people, but he could not achieve this mobilization of his uneducated people adequately faced with the dilemma of using a foreign language.