What's in a name? Naming in the T.V.-series LOST 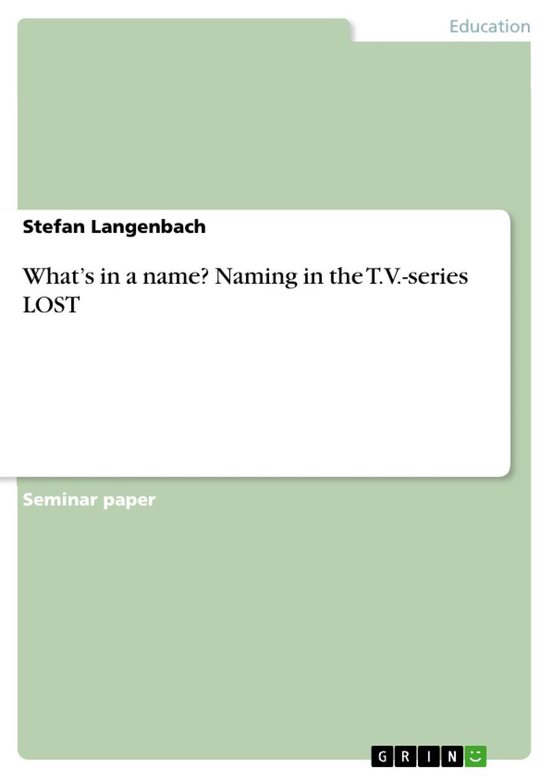 Seminar paper from the year 2010 in the subject English - Pedagogy, Didactics, Literature Studies, grade: 2,0, University of Cologne (Philosophische Fakultät / Englische Seminar 1), course: Onomastics, language: English, abstract: 1Intro 2Names of theotechny 2.1Benjamin Linus 2.2James (Sawyer) Ford 2.3Jacob 2.4Desmond and Penelope 2.5Dharma 2.6Christian Shephard 3Famous names 3.1Henry Gale 3.2Daniel Faraday 3.3Desmond David Hume 3.4Danielle Rousseau 3.5Further references 4Reference to literature 4.1The adventures of Tom Sawyer 4.2The Wizard of Oz 4.3Lord of the flies 4.4Addendum 5Anagrams 5.1Ethan Rome 5.2Mittelos Bioscience 5.3Herarat Aviation 5.3.1Amelia Earhart 5.3.2A variation earth 5.4Further Anagrams 6Mixed patterns 6.1Gale Island 6.2Linus 6.3Sayid Jarrah 6.4Claire Littelton 6.5Jack's Tattoo 6.6Literal meaning of names 7Conclusion Until the ninth century it was not likely to have a first and a last name, but by that time things started to change. In Venice the indication of surnames began in this time period, France (10th/11th century) and the German-speaking area (12th century) followed this example (Kohlheim 1996: 1280), so the common practice of naming changed and thenceforth people were called by both, forename and surname. This giving of names led to the science of onomastics - representing a separate discipline (Wittkowski 1995: 289) -, whose purpose basically is 'die Geschichte und den Gebrauch eines Namens zu klären und mögliche Schlüsse daraus zu ziehen' (Hansack 2004: 51), as the character of naming had caused people to think about the meaning of personal names for centuries (Eichler 1995: 2). Such name-interpreting can also take the role of a poetic device and by this means as literary onomastic (Hansack 2004: 51) function as a link between linguistic and literary studies bearing on 'the study of the way names function in fiction' (Ashley 1989: 198). The following term paper will take up this and consequently concentrate on the names of the characters in the TV series LOST. This idea came up after reading an article by Matthew Gilbert, who quoted Damon Lindelof - one of the makers of LOST - mentioning that not one name of the island's inhabitants was chosen incidentally but that every single name had a special meaning concerning the storyline (Gilbert 2005). Lindelof and co-producer J. J. Abrahams used 'names that gesture outward from the series' in a way that 'name[s] assists [the] definition of character[s], suggesting clues of [...] personality' and are an 'entrance to that what [they] represent[s]; direction; past, current or future position' (Rowden 2000: 115) and therefore played 'the name game quite shrewdly' (Gilbert 2005).