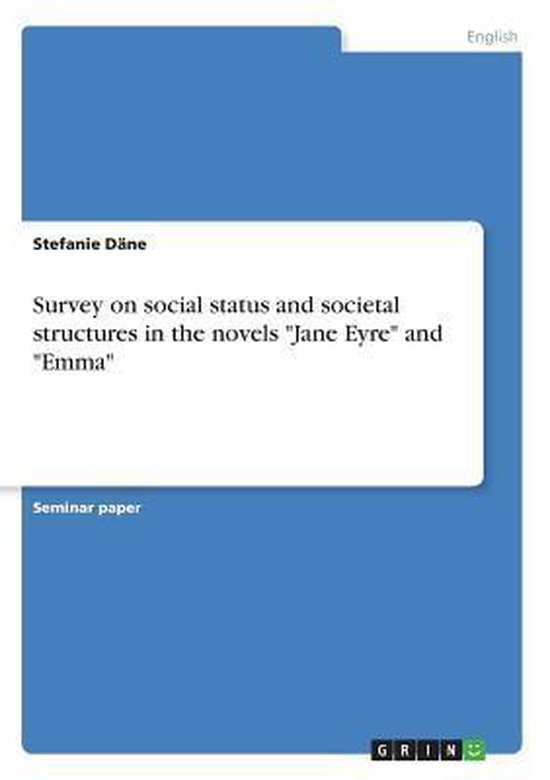 Seminar paper from the year 2005 in the subject English Language and Literature Studies - Literature, grade: 1,3, University of Göttingen (Seminar für Englische Philologie), course: Nineteenth-Century Fiction, language: English, abstract: In this term paper I am going to examine and compare how societal structures and social status are depicted in the fictional autobiography Jane Eyre by Charlotte Brontë and the social satire Emma by Jane Austen. The decision for this topic and why I limited the survey to these two novels is based on several reasons. Concerning the topic I was influenced by my first reading impressions in which I was astonished at the depicted variety and importance of societal structure which thus simply inspired me to learn more about it. In respect to the selected novels my choice was more differentiated. When I started working on this paper I wanted to include Dickens´ 'Great Expectations' but soon I decided that this might lead - due to the limited length of 20 pages - to a quite superficial examination of the topic. Moreover, excluding Dickens appeared rational to me due to the fact that the novels by Austen and Brontë seemed to provide, with their similar themes and their female protagonists, a greater basis for comparison. Knowing that the Brontës did not like what and how Jane Austen wrote confirmed my speculations in regard of these novels providing an interesting basis for comparison. Furthermore, the thirty years which lay in between the publications of Emma (1816) and Jane Eyre (1847) make it possible to examine in how far society had changed in the meantime. Starting off with a comparative structural analysis of the novels in the backdrop of the question how social status influences the heroine´s progresses, I want to show how much social status mattered and which consequences were connected to it. In the following sections, Emma and Jane Eyre shall be examined and compared with regard to the parts of society that play a role in them, concerning the restrictions and social mores connected with their marriage plots and in respect of the special rank governesses seem to have occupied in it. This shall be done to get an impression of the distinctions that characterised the different groups in nineteenth-century class society as well as to get an insight into the social mores that laid the foundations for it and finally to explain and understand the socially ambiguous rank of governesses. In the last section I am going to prove with the help of nineteenth-century reviews if the way and the conditions which were taken into consideration in the previous sections corresponded to or contradicted the ideas of class society of Brontë´s and Austen´s contemporaries.