The need to assimilate 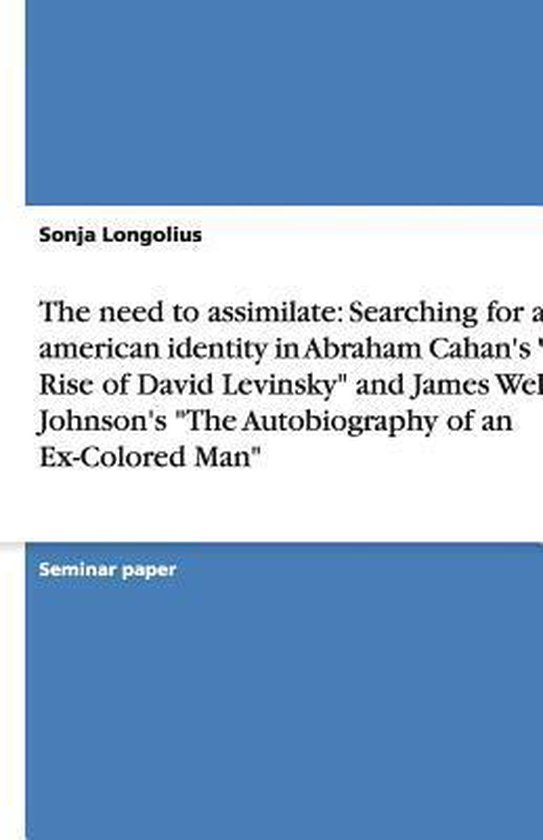 Seminar paper from the year 2005 in the subject American Studies - Literature, grade: 1,3, Free University of Berlin (John-F.-Kennedy Institut ), course: 'The Subaltern Speaks': Minority Literature in the USA, 12 entries in the bibliography, language: English, abstract: Around World War One, two American authors from different minority backgrounds published their seemingly unlike novels. In 1912, the African American diplomat and writer James Weldon Johnson published his narrative "The Autobiography of an Ex-Colored Man" anonymously, and in 1917, the Jewish American editor and journalist Abraham Cahan put out his novel "The Rise of David Levinsky." Despite all differences obvious between the authors and their protagonists, both novels nevertheless describe at their core the need to assimilate, the search for an American identity and the costs of assimilation. In their quest for an American identity, both protagonists, the former Orthodox Jew from Russia and the anonymous, light-skinned African American, chose to escape white Anglo-Saxon Protestant hostility towards their minority status by assimilating respectively by passing as far as possible into the dominant culture of white American society. The need to assimilate derives from the fear of marginalization and the hostility shown towards minority groups in America. It is precisely this threatening attitude in combination with a longing to take part in the dominant culture of American society that finally forces these characters to assimilate respectively to pass entirely. Despite their minority backgrounds, both protagonists manage to enter the dominant culture at last. But even though both men live up to a life of financial and social success at the end of the novels, their narratives are not simply average American success-stories, but rather tragic tales on the high costs of assimilation. Levinsky and the Ex-Colored Man live the classical American dream from "rags to riches," but in the end, both must nevert