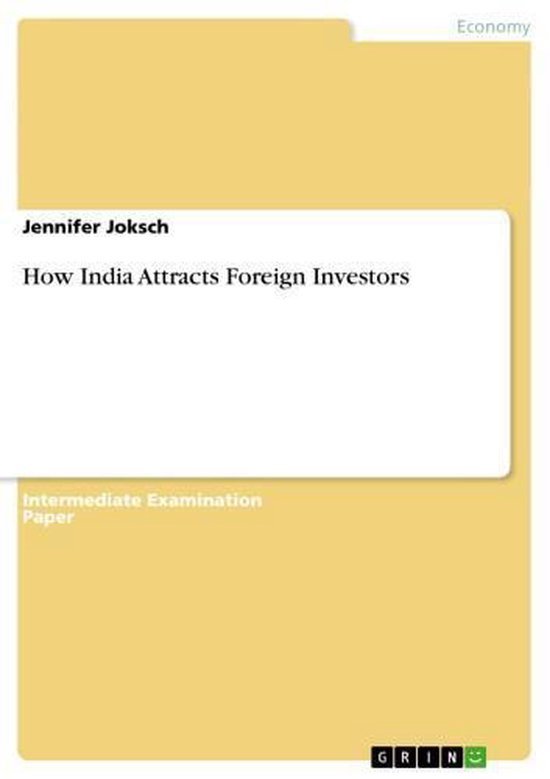 Intermediate Examination Paper from the year 2006 in the subject Business economics - Investment and Finance, University of Cooperative Education (University of Cooperative Education), 38 entries in the bibliography, language: English, abstract: The history of today's Indian civilization goes back to at least 5,000 years. Until the British conquest in the 19th century, the Indian history was similar to the European. Indian colonial time started with the landing of the Portuguese seaman Vasco de Gama in 1498. In the following century more and more European countries entered into trade with the Asian subcontinent. Britain dominated the trades and gained full military and economic control by 1857, followed by the founding of the Indian Empire, ruled by Queen Victoria's viceroy. Economical structures were formed to the purpose of Britain's colonial interests but at the end of the century the awareness of Indian nationalism and culture rose. After World War One Indian strive for Independency was strengthened by two key figures: Mohandas Karamchad Gandhi (also known as Mahatma Gandhi) was not only able to mobilize the rural population, who had been ignorant, exploited and apathetic, but also to unite Hindus and Moslems in the fight against the cast system. With Jawaharlal Nehru as president of the Congress Party Great Britain granted parliamentary self-governance for the provinces in 1935 and allowed elections in 1937, followed by a total breach between Hindus and Moslems. By 1947 Gandhi's principles of nonviolence, passive resistance and civil disobedience beard fruits: Great Britain left the Asian subcontinent. Still trying to unite Moslems and Hindus, Gandhi was murdered by a Hindu-extremist in 1948 followed by the empire's divide into India and Pakistan. Another war in 1971 caused the separation of Bangladesh from Pakistan.1On January 26th 1950 the constitution of the 'Sovereign Socialist Secular Democratic Republic of India'2became effective - its structures remain until today. India is the largest democracy in the world with a population of 1.1 billion inhabitants and an area of 3.3 million km², which survived crisis and remains stable despite of its enormous heterogeneity, an unrivaled cultural, social and economic variety. But still a free capitalist market was not able to prevail: Nehru favored a model of a centrally driven and planned economy to fulfill the vision of an 'Independent India' - following the model of the former Soviet Union. The mixed economy should protect India from foreign investments and secure its independency and self-reliance. However it lead to India's isolation from the world market.