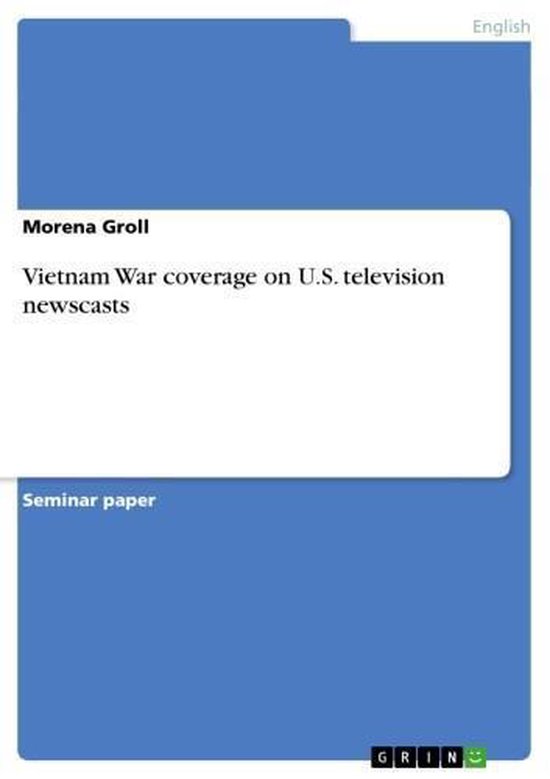 The Vietnam War was and still is a decisive chapter in U.S. history. It was the longest military conflict, which on top of everything ended in defeat for the Americans. This war had an enormous impact on various spheres both in private and public life. Above all, it drastically shaped the relationship between politics and public opinion and raised questions on the role the media played during the military conflict. The Vietnam War and its perception were unprecedented in their entire dimension. In general this was due to the climate of social and political change taking place during the 1960's and, more specifically, because of a totally new institution being embedded in this situation- television. During this decade television expanded and became the most important source of information for the people. This medium offered totally new perspectives and dimensions both of war coverage and its perception, which is clearly expressed in the following statement: 'Television brought the brutality of war into the comfort of the living room'.1 The fact that there was no experience with regard to the mechanisms, methods and effects of TV war coverage made a rather experimental reporting possible. Both journalists and politicians were facing a new situation, concerning the intertwining between television, politics and the Vietnam War issue.

This paper aims at examining this interrelation by analysing the way the Vietnam War was covered by U.S. television and by looking at the consequences of this coverage. This examination shall provide answers to questions asking for the impact of television on public opinion, U.S. politics and the course of war. The focus is put on television, because studies and surveys have shown that more than half of the American population received their information from television newscasts, which they considered to be more reliable than the press or other media.2 In addition, there is comprehensive material on television reporting as well as profound analyses of it, which is a rather pragmatic reason for concentrating on the role of U.S. TV during the Vietnam War. This paper is concerned with the contents and characteristics of war coverage and the effect it had on the role of the media during the Vietnam War. [...]