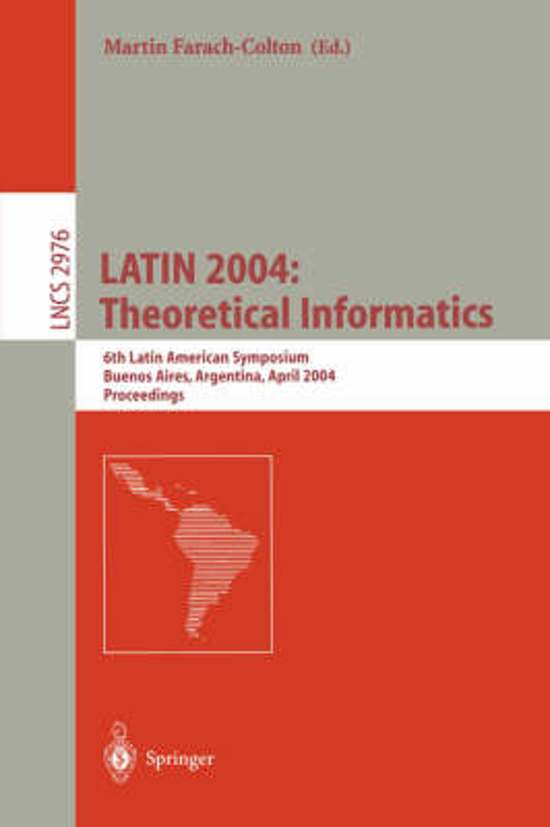 This volume contains the proceedings of the Latin American Theoretical Inf- matics (LATIN) conference that was held in Buenos Aires, Argentina, April 5-8, 2004. The LATIN series of symposia was launched in 1992 to foster interactions between the Latin American community and computer scientists around the world. This was the sixth event in the series, following S~ ao Paulo, Brazil (1992), Valparaiso, Chile (1995), Campinas, Brazil (1998), Punta del Este, Uruguay (2000), and Cancun, Mexico (2002). The proceedings of these conferences were also published by Springer-Verlag in the Lecture Notes in Computer Science series: Volumes 583, 911, 1380, 1776, and 2286, respectively. Also, as before, we published a selection of the papers in a special issue of a prestigious journal. We received 178 submissions. Each paper was assigned to four program c- mittee members, and 59 papers were selected. This was 80% more than the previous record for the number of submissions. We feel lucky to have been able to build on the solid foundation provided by the increasingly successful previous LATINs. And we are very grateful for the tireless work of Pablo Mart' ?nez L' opez, the Local Arrangements Chair. Finally, we thank Springer-Verlag for publishing these proceedings in its LNCS series.