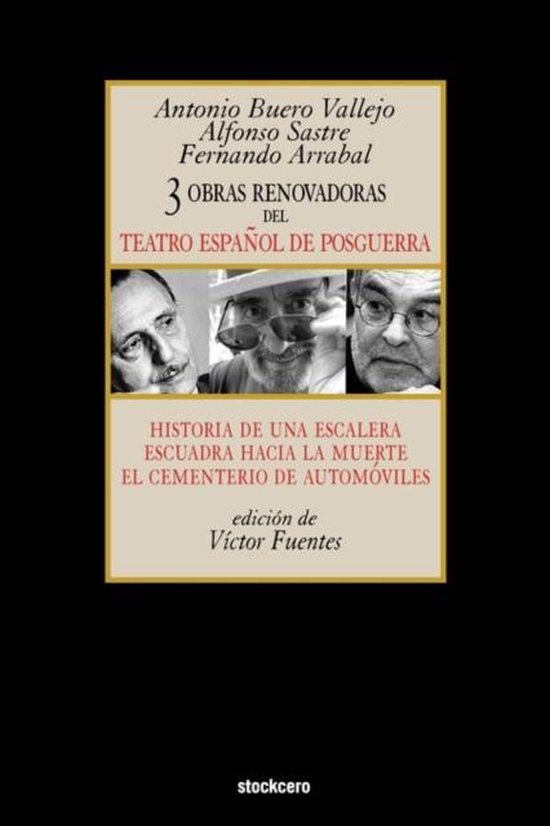 In spite of the Franco regime censorship, and after an initial almost total purge that meant exile to many of the top intellectuals and artists, the evolutionary process of peninsular Spanish art and culture did not stop to a complete standstill. During the 40's and 50's a renewal movement took place, and the three playwrights and their plays included in this volume were of utmost importance to it. The case of Arrabal, premiered outside the Spanish borders and in French, though most of his production was conceived and written initially in Spanish, is a perfect example of how Spanish literature kept its liveliness, even in exile. These three plays also share the fact of being tragedies, a very uncommon characteristic in Spanish theatre, specially so during the years in which comedy ruled as a very convenient way of escaping the dramatic socio-political surrounding reality. The renewal impulse in Spanish theatre started in 1945. That year the -Arte Nuevo- group was established, and in 1949 -Teatro de Vanguardia. 15 obras de Arte Nuevo- was published. Avant garde theatre New Art during the 40's in Franco's Spain The renewed and open-minded theatrical context that emerged in the stifled climate of the Franco Spain of the 40's, the so called -black decade-, is noticeably present in these plays of the Antonio Buero Vallejo, Alfonso Sastre and Fernando Arrabal production. Sastre, as well as Arrabal and Buero Vallejo were imprisoned by the regime, and these plays reflect their respective biographical projections. This volume gathers these authors' different styles and playwriting -very often clashing- but whose common constant is the linking of the Spanish theatre with the international drama tendencies. Along his introduction professor Victor Fuentes develops a schematic analysis of the Buero Vallejo, Sastre and Arrabal achievements through drama experimentation in their respective plays. With this edition we offer the US reader three fundamental plays of the literary, cultural and theatrical Spanish -and universal- memory of more than half a century ago, whilst proposing the deciphering of their present meanings and projections into the future."