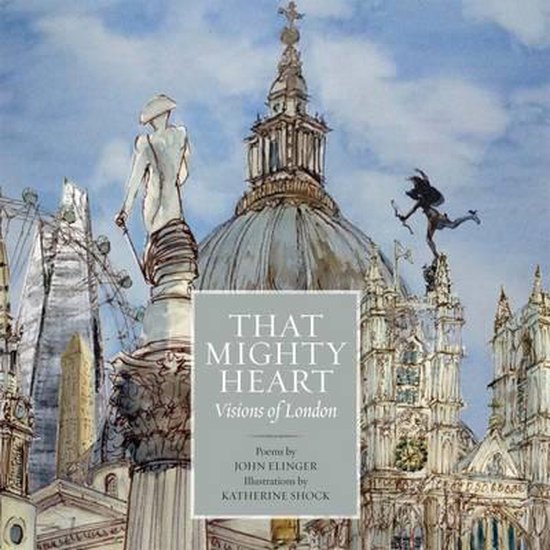 In 1802 William Wordsworth, the great Romantic poet, gazed over London and claimed Earth has not anything to show more fair . Two centuries after his famous sonnet Upon Westminster Bridge , That Mighty Heart offers a visual and poetic tribute to a city that today has even stronger claims to be one of the greatest in the world. Designed in the form of seven walks across and around London, and radiating out in all directions from the heart of the city, this book portrays in paint and verse the buildings, parks and sights, both famous and less well-known, that have shaped its history, and contribute to its continuing fascination. The first sequence of poems and paintings focuses on Westminster, taking the reader (and walker) from Westminster Bridge via the Houses of Parliament to Buckingham Palace. The second follows a route through the Kensington area, including Harrods, the Royal Albert Hall and Kensington Palace. The third takes in the British Museum and Covent Garden. The fourth threads its way through the heart of London, from Piccadilly Circus to The Old Bailey, via Trafalgar Square, the National Gallery and Cleopatra's Needle. The fifth crosses the City of London, finishing at the Tower of London and Tower Bridge. The sixth follows the towpath westwards along the south bank of the Thames: Southwark Cathedral and the Shard, the Globe Theatre and the Festival Hall, the Imperial War Museum and the London Eye. The final sequence takes in memorable outlying sites like Hampton Court, Kew Gardens Highgate Cemetery Canary Wharf, Brick Lane, the EIIR Olympic Park and Greenwich. The Introduction provides a concise description of London today and brief history of this remarkable city. Simple and clear maps make it easy for visitors to follow the walks and find their way around London. In words and images That Mighty Heart evokes a place which has gradually changed over the centuries, and yet remains timeless in its beauty and interest.