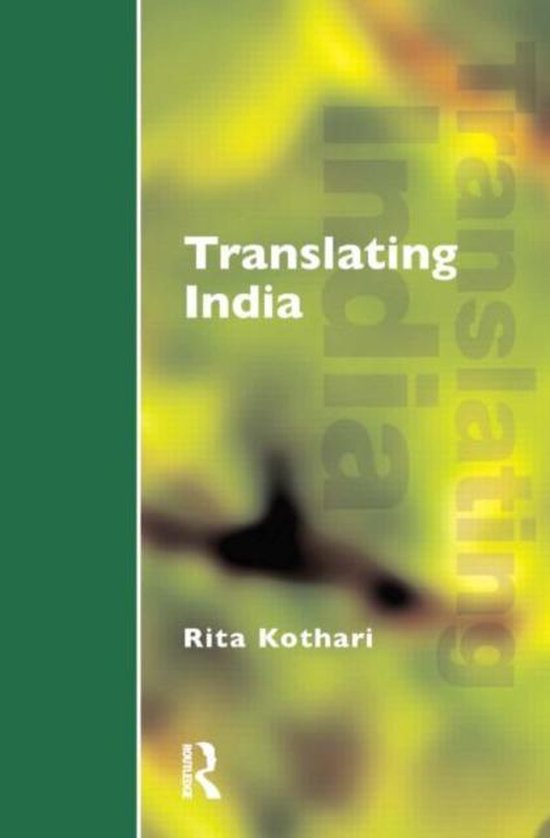 The cultural universe of urban, English-speaking middle class in India shows signs of growing inclusiveness as far as English is concerned. This phenomenon manifests itself in increasing forms of bilingualism (combination of English and one Indian language) in everyday forms of speech - advertisement jingles, bilingual movies, signboards, and of course conversations. It is also evident in the startling prominence of Indian Writing in English and somewhat less visibly, but steadily rising, activity of English translation from Indian languages. Since the eighties this has led to a frenetic activity around English translation in India's academic and literary circles. Kothari makes this very current phenomenon her chief concern in Translating India. The study covers aspects such as the production, reception and marketability of English translation. Through an unusually multi-disciplinary approach, this study situates English translation in India amidst local and global debates on translation, representation and authenticity. The case of Gujarati - a case study of a relatively marginalized language - is a unique addition that demonstrates the micro-issues involved in translation and the politics of language. Rita Kothari teaches English at St. Xavier's College, Ahmedabad (Gujarat), where she runs a translation research centre on behalf of Katha. She has published widely on literary sociology, postcolonialism and translation issues. Kothari is one of the leading translators from Gujarat. Her first book (a collaboration with Suguna Ramanathan) was on English translation of Gujarati poetry (Modern Gujarati Poetry: A Selection, Sahitya Akademi, New Delhi, 1998). Her English translation of the path-breaking Gujarati Dalit novel Angaliyat is in press (The Stepchild, Oxford University Press). She is currently working on an English translation of Gujarati short stories by women of Gujarat, a study of the nineteenth-century narratives of Gujarat, and is also engaged in a project on the Sindhi identity in India.