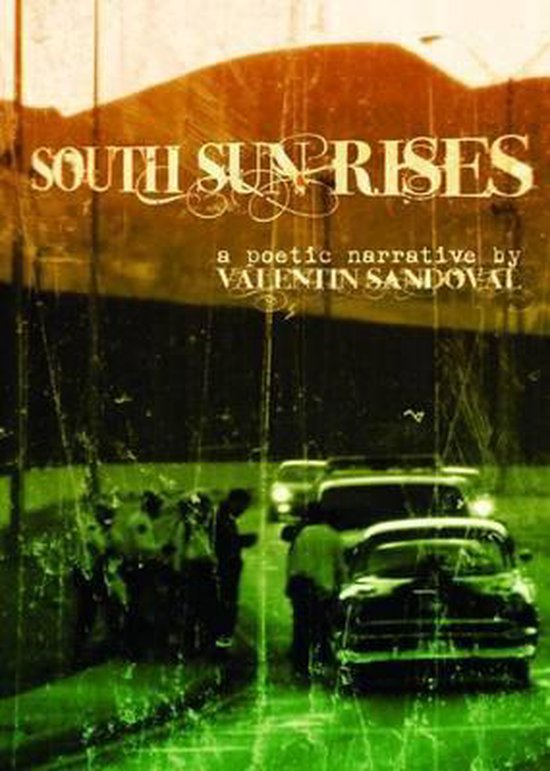 Sandoval is not a peach-cheeked poet as so many of his professorial contemporaries. He's border man, a Chicano carnal, unashamed of embracing his roots, his hybrid corn mother and grandfather sky/sun. He holds PhDs in street living, unmasked suffering, loyalty, humor of forgotten ones. SOUTH SUN RISES is a poetic narriative of a pursuit of the American dream on one of the worldâs most compelling and dangerous international borderland, El Paso/Juarez. Reminiscent of Jimmy Bacaâs epic poem, âMartin and Meditations in the South Valley, it has a narrative arc expressed in a series of long and short poems. It is the story of Sandovalâs motherâs quest to define her identity and provide the foundation for a family in the United States. Rishing it all and leaving behind her life in Juarez, she finds herself isolated and alone in the gritty projects of El Paso. Her dramatic new life begins with a tumultuous crossing of the Rio Grande with âcoyoteâ who dies while saving her from deadly river undercurrents. That inauspicious introduction into what would become her story in the U.S. portends a tough and textured life. In the projects, a local drug addict rapes her. She then has to contend with finding a better place to raise her children, while still gravitating to her homeland, Mexico, connecting to her roots and family and preserving her cultural identity while avoiding becoming engulfed in a cycle of poverty within sight of the American dream. Her children work to carve out their dreams in this unstable setting while staying connected as a family. The story is told through the eyes of the writer, forced to raise himself due to the fact that his siblings are working two jobs or caught in street dramas. The landscape is covered by a cloud of an almost Darwinian survival, with drug dealers, and gang wars permeating around a bicultural borderland that emanates a unique song and dance that is unlike any in the US. The book adopts poetics as a form of familial understanding, a surreal kind of folklore in order for the writer to understand the life cycle he finds himself in. Sandoval also uses that as a tool to search for his fathers voice, killed in Juarez, whom he never got to know. The story unfolds with a vivid and metaphoric interpretation that takes the reader for a tough and captivating ride.