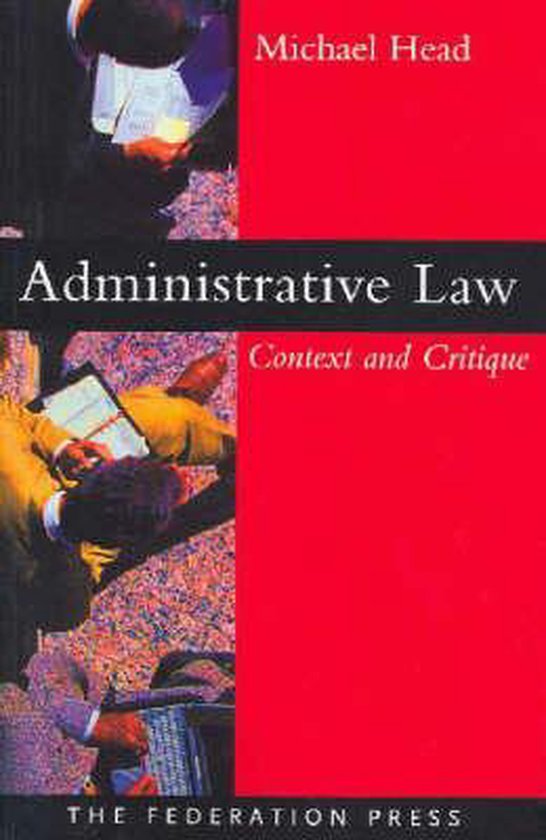 Administrative law is one of the most political and controversial areas of law. It regulates the basic rights of individuals, the public and businesses against the government by ensuring that those individuals and bodies exercising administrative power do so within the law. As a result, administrative law impacts on Australians wherever and whenever their lives are touched by government - in more everyday and local matters such as paying tax, claiming social security or appealing a council planning decision and in those rarer cases of the most personal, national and political importance, such as the Tampa refugee case, the Hindmarsh Island bridge cases and the Greek conspiracy social security case. Despite its clear interest and importance, administrative law is often approached with foreboding. Full of technicalities and arcane distinctions, administrative law is seen as one of the most dense and difficult areas of law to understand. Author Michael Head makes administrative law intelligible, intellectually satisfying and even enjoyable. Head reviews administrative law with a keen critical eye to its historical, political, economic, social and governmental context.He argues that unless you know the political controversies, policy arguments, judicial trends and constitutional tensions that lie behind nearly all the major cases, you simply cannot understand how and why the courts have reached their decisions. Written primarily as a student text and cross-referenced to Douglas and Jones's Administrative Law and other leading texts, Michael Head's book combines clear and succinct exposition of legislation, rules and principles; pithy and critical summaries of main cases; and commentary that takes readers beyond the strict legalities to gain a feel for the social fabric, political dynamics, judicial schisms and evolution of the law.