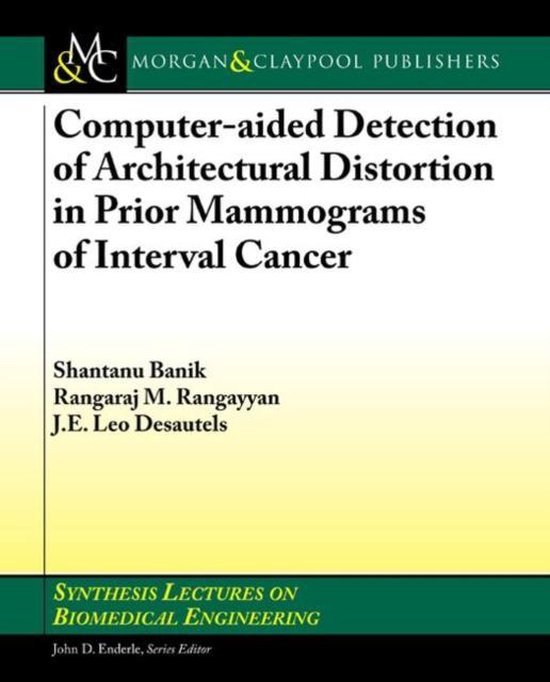 Architectural distortion is an important and early sign of breast cancer, but because of its subtlety, it is a common cause of false-negative findings on screening mammograms. Screening mammograms obtained prior to the detection of cancer could contain subtle signs of early stages of breast cancer, in particular, architectural distortion. This book presents image processing and pattern recognition techniques to detect architectural distortion in prior mammograms of interval-cancer cases. The methods are based upon Gabor filters, phase portrait analysis, procedures for the analysis of the angular spread of power, fractal analysis, Laws' texture energy measures derived from geometrically transformed regions of interest (ROIs), and Haralick's texture features. With Gabor filters and phase-portrait analysis, 4,224 ROIs were automatically obtained from 106 prior mammograms of 56 interval-cancer cases, including 301 true-positive ROIs related to architectural distortion, and from 52 mammograms of 13 normal cases. For each ROI, the fractal dimension, the entropy of the angular spread of power, 10 Laws' texture energy measures, and Haralick's 14 texture features were computed. The areas under the receiver operating characteristic (ROC) curves obtained using the features selected by stepwise logistic regression and the leave-one-image-out method are 0.77 with the Bayesian classifier, 0.76 with Fisher linear discriminant analysis, and 0.79 with a neural network classifier. Free-response ROC analysis indicated sensitivities of 0.80 and 0.90 at 5.7 and 8.8 false positives (FPs) per image, respectively, with the Bayesian classifier and the leave-one-image-out method. The present study has demonstrated the ability to detect early signs of breast cancer 15 months ahead of the time of clinical diagnosis, on the average, for interval-cancer cases, with a sensitivity of 0.8 at 5.7 FP/image. The presented computer-aided detection techniques, dedicated to accurate detection and localization of architectural distortion, could lead to efficient detection of early and subtle signs of breast cancer at pre-mass-formation stages.