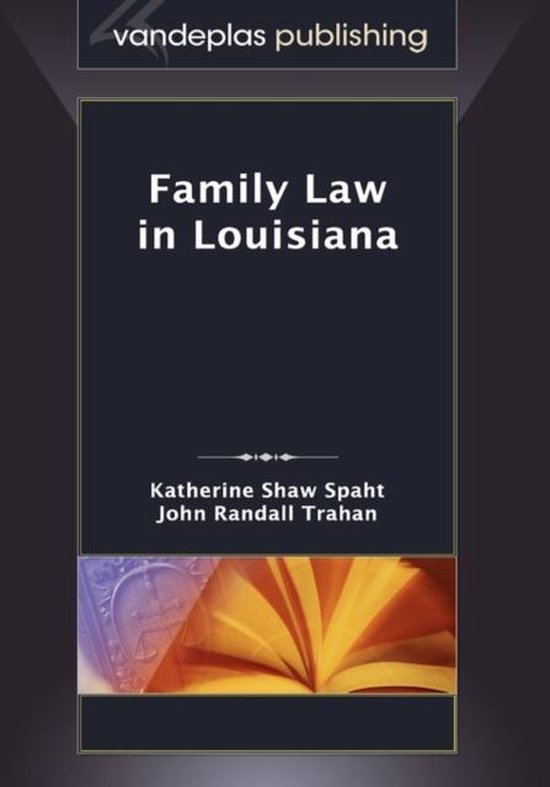 Family Law in Louisiana is designed for use in law school courses that involve the study of the distinctive family law of Louisiana, a law that represents a unique blend of Continental ("civilian"), Anglo-American, and autochthonic legal principles. Topics covered include those that would be covered in a standard textbook on American family law, including prerequisites for and the nullity of marriage; the dissolution of marriage; the incidents of divorce, such as interspousal alimony, child custody, and child support; filiation (paternity); parental responsibility and authority; care for children outside of marriage (tutorship); care for incapacitated adults (curatorship); choice of law; and constitutional constraints on state regulation of family relations. About the authors: Katherine Shaw Spaht is the Jules F. and Frances L. Landry Professor of Law (Emeritus) and former Vice Chancellor (1990-1992) at Louisiana State University's Paul M. Hebert Law Center. Since 1972, she has taught courses in the areas of family law and marital property law. In addition to overseeing the revision of Louisiana's community property law in 1978 and drafting Louisiana's covenant marriage legislation in 1997, she has worked with the Louisiana legislature on such varied topics as needs of women, rights of illegitimate children, "assisted conception," and child support, no-fault divorce, and same-sex marriage. She has been the Reporter of the Louisiana State Law Institute's "Persons & Family Law" Committee since 1981 and also serves on the American Law Institute's Committee on the Principles of the Law of Family Dissolution. Through the years she has produced a significant corpus of publications pertaining to family and marital law, including a treatise on Louisiana marital property law (co-authored with Lee Hargrave), which forms part of the Louisiana Civil Law Treatise Series, and most recently, Who's Your Momma, Who Are Your Daddies? Louisiana's New Law of Filiation, 67 LA. L. REV. 307 (2007). J. Randall Trahan is the James Carville Alumni Professor of Law at Louisiana State University's Paul M. Hebert Law Center. In each of the past ten years, he has taught courses in "family" or "marital property" law. During that same time he has produced several publications related to family or marital property law, including Glossae on the New Law of Marital Donations, 65 LA. L. REV. 1059 (2005); Glossae on the New Law of Filiation, 67 LA. L. REV. 387 (2007); and Prerequisites to Marriage in Scotland and Louisiana: An Historical-Comparative Investigation, in MIXED JURISDICTIONS COMPARED: PRIVATE LAW IN LOUISIANA AND SCOTLAND (Vernon Valentine Palmer and Elspeth Christie Reid eds., Edinburgh Univ. Press, forthcoming 2009); has spoken as a lecturer on "recent developments" in family law at a number of continuing legal education conferences; and has participated in the drafting of reform legislation in Louisiana that has addressed such matters as covenant marriage, no-fault divorce, filiation (paternity), marital donations, and same-sex unions. For the past five years, he has served as a member of the Louisiana State Law Institute's "Persons & Family Law" Committee.