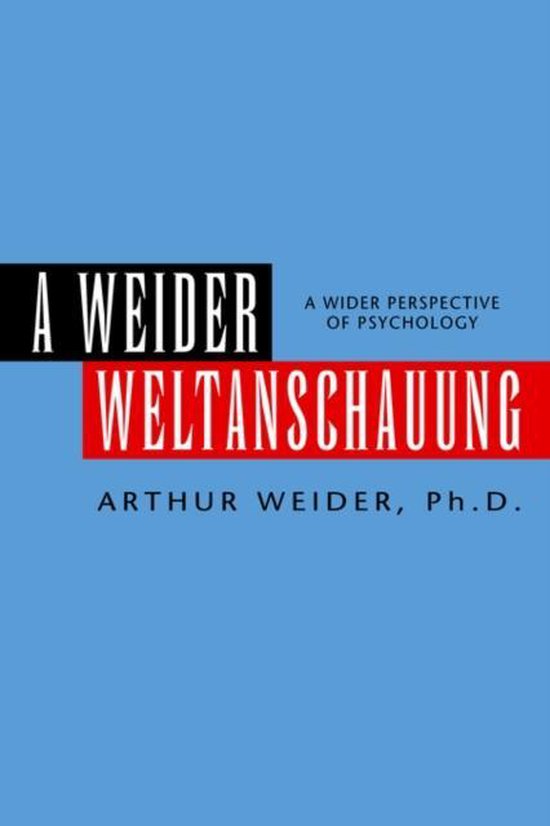 Clinical psychology takes a personal turn in Dr. Arthur Weider's newest work. A Weider Weltanschauung: A Wider Perspective of Psychology. Dr. Weider uses his own life experience as a source of inspiration and intervention for both his patients and his colleagues. Through thought-provoking descriptions of the many turning points in his life, Weider begins his intimate portrayal by detailing how growing up in a poor family in New York's South Bronx taught him to face adversity with a unique sense of optimism. This optimism ultimately helped Weider overcome the challenges of a tumultuous childhood, which included the witnessing of the actual death of his father when he was ten years old and his continued struggle with poverty during the Great Depression. The second turning point in Weider's life came at the age of fourteen while browsing through his older brother's psychology textbook. His immediate fascination with psychology marked the beginning of a long and illustrious career. A Weider Weltanschauung: A Wider Perspective of Psychology paints a vivid portrait of Weider's success, including his involvement in developing the Wechsler Bellevue Adult Intelligence Scale IQ test; introducing psychological testing and counseling to corporate America; evaluating the infamous Lt. William Calley following the My Lai massacre; and being one of the first mental health professionals to use radio and television as media for public education in topics of psychology.. Weider's diversified career has also branched into the entertainment industry. During the seventies he became part-owner of a restaurant and disco in Manhattan where, every weekend, the famous and the not-so-famous enjoyed food, and occasionally, a bit of therapy from the proprietor. The second section of Weider's book focuses on a compilation of his published articles that appeared over the past 60 years in peer-reviewed journals and also in various national newspapers The final section of Weider's work concentrates on some of the more interesting patients he has treated over the years. Colorful anecdotes coupled with endearing case histories accentuate the potency of this segment. A Weider Weltanschauung: A Wider Perspective of Psychology enthralls readers with its in-depth look at the world of psychology, the professionals who make a difference, and the patients whose disorders have become true testimonies of our ever-changing society. Dr. Weider's career epitomizes his epitaph: "WHILE HE LIVED.HE CARED."