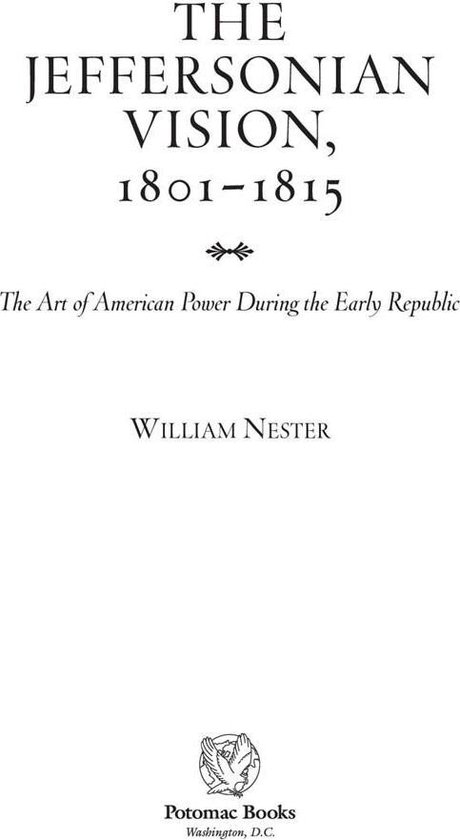 The Jeffersonian Vision, 1801–1815 reveals how the nation's leaders understood and asserted power during those crucial years between Thomas Jefferson's inauguration as the third president and the firing of the last shots at the battle of New Orleans. Seeking to overcome the bitter political animosities that had plagued the years leading up to his presidency, Jefferson declared in his inaugural address that we are all Federalists, we are all Republicans. His words proved to be prescient. The Republican Party, soon to be renamed the Democratic Party, would dominate American politics for another half century.

Most Americans laud Jefferson's presidency for the purchase of the Louisiana Territory, which extended the United States westward to the Rocky Mountains, and for the launch of the Lewis and Clark expedition, which journeyed to the Pacific Ocean and back. But critics then and since have blasted Jefferson and his immediate successor, James Madison, for a series of ideologically driven blunders. Jefferson envisioned a largely autarkic nation with yeoman farmers serving as its economic and political backbone. That notion was at odds with an America whose wealth was increasingly gleaned from foreign markets. The Republican policy of wielding partial or complete trade embargos as a diplomatic weapon repeatedly backfired, inflicting grievous damage on America's economy and culminating with an unnecessary war with Britain that was devastating to America's power and wealth, if not its honor.

Despite their philosophical and political differences, Federalists and Republicans alike proved capable enough at the art of power when they headed the nation. They implemented a spectrum of mostly appropriate means, first to win independence and then to consolidate and eventually expand American wealth and territory. Readers today will recognize the roots of red state/blue state conflict in these earliest competing visions of the roots of American power—and of what America might be.