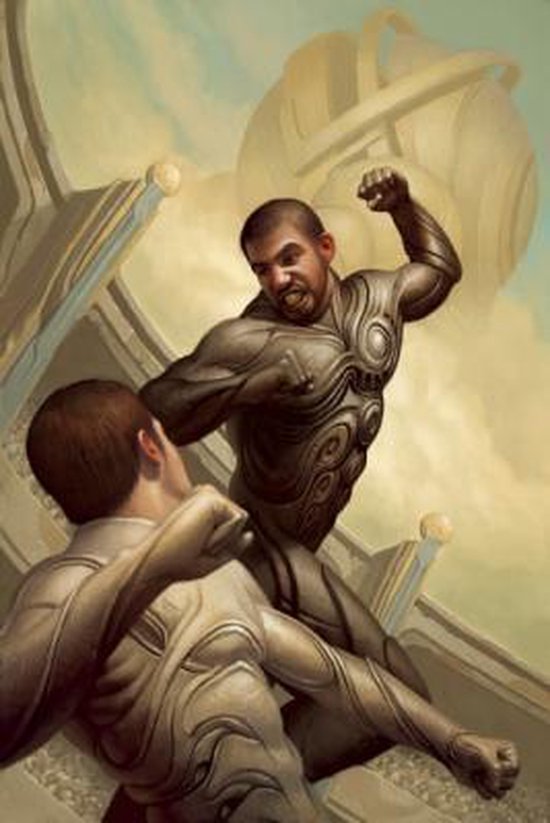 On Jeroun, there is no question as to whether God exists only what his intentions are. Under the looming judgment of Adrash and his ultimate weapon a string of spinning spheres beside the moon known as The Needle warring factions of white and black suits prove their opposition to the orbiting god with the great fighting tournament of Tchootoo, on the far side of Jeroun's only inhabitable continent. From the Thirteenth Order of Black Suits comes Vedas, a young master of martial arts, laden with guilt over the death of one of his students. Traveling with him are Churls, a warrior woman and mercenary haunted by the ghost of her daughter, and Manshep, a constructed man made of modular spheres possessed by the foul spirit of his creator. Together they must brave their own demons, as well as thieves, mages, beasts, dearth, and hardship on the perilous road to Tchootoo, and the bloody sectarian battle that is sure to follow. On the other side of the world, unbeknownst to the travelers, Ebn and Pol of the Royal Outbound Mages (astronauts using Alchemical magic to achieve space flight) have formed a plan to appease Adrash and bring peace to the planet. But Ebn and Pol each have their own clandestine agendas which may call down the wrath of the very god they hope to woo. Who may know the mind of God? And who in their right mind would seek to defy him? Gritty, erotic, and fast-paced, author Zachary Jernigan takes you on a sensuous ride through a world at the knife-edge of salvation and destruction, in this first installment of one of the year's most exciting fantasy epics. Skyhorse Publishing, under our Night Shade and Talos imprints, is proud to publish a broad range of titles for readers interested in science fiction (space opera, time travel, hard SF, alien invasion, near-future dystopia), fantasy (grimdark, sword and sorcery, contemporary urban fantasy, steampunk, alternative history), and horror (zombies, vampires, and the occult and supernatural), and much more. While not every title we publish becomes a New York Times bestseller, a national bestseller, or a Hugo or Nebula award-winner, we are committed to publishing quality books from a diverse group of authors.