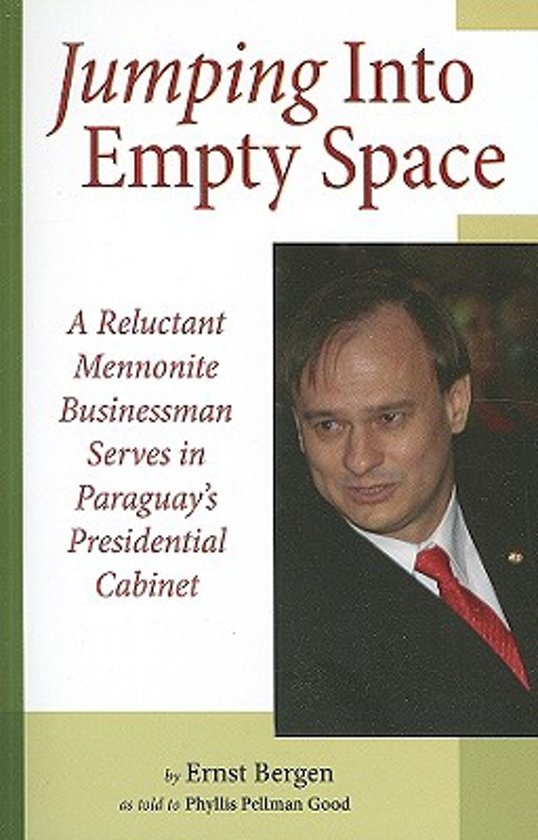 Ernst Bergen had good reason to say no when the President of his country asked him to join his cabinet. Massive corruption was considered the ordinary course of business in Paraguay and had driven it to near financial ruin. Bergen, at age 39, was among the most successful men in the country with not an ounce of interest in government politics. What's more, Bergen grew up in a Mennonite colony situated in the inhospitable wilderness of the Paraguayan Chaco. He belongs to a highly industrious religious people who, for reasons of history and theology, are acutely suspicious of being involved in government. Jumping Into Empty Space tells two stories: the beginning of a remarkable economic turn-around in a battered country at the hand of this fearless business strategist; and the emergence of a true leader, told with unusual honesty and wisdom. Not only did Bergen have his own hot temper to control, he had to face extraordinary special interests and decades of despair everywhere, including in the President's own party.

Skyhorse Publishing, along with our Arcade, Good Books, Sports Publishing, and Yucca imprints, is proud to publish a broad range of biographies, autobiographies, and memoirs. Our list includes biographies on well-known historical figures like Benjamin Franklin, Nelson Mandela, and Alexander Graham Bell, as well as villains from history, such as Heinrich Himmler, John Wayne Gacy, and O. J. Simpson. We have also published survivor stories of World War II, memoirs about overcoming adversity, first-hand tales of adventure, and much more. While not every title we publish becomes a New York Times bestseller or a national bestseller, we are committed to books on subjects that are sometimes overlooked and to authors whose work might not otherwise find a home.