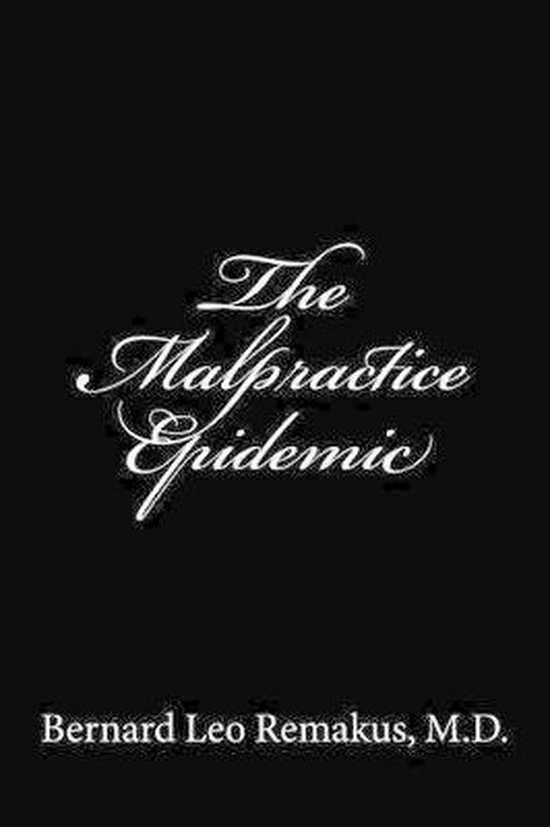 THE MALPRACTICE EPIDEMIC is a behind-the-scenes look at medical malpractice and its numerous implications. Concise, informative and provocative, it is the original, definitive and undisputed LAYMAN'S GUIDE TO MEDICAL MALPRACTICE, as well as a valuable reference for even the most knowledgeable physician or lawyer.In addition to medical malpractice, THE MALPRACTICE EPIDEMIC also analyzes other problems with our current health care delivery system, including the health insurance industry, government-sponsored health care, and the organized movement to keep a single payer health insurance program out of the United States. Since 1990, THE MALPRACTICE EPIDEMIC has acquainted readers with such concepts as maloccurrence and defensive medicine in hardcover, paperback and e-book editions. Like its predecessors, this third print edition proposes a single plan to solve the ongoing malpractice crisis and make quality and affordable health care available to every American."Many of us, whether as patients or as caregivers, have seen errors and problems occur within the medical profession. Some people are quick to label these experiences as malpractice. Dr. Bernard Leo Remakus, author of The Malpractice Epidemic: A Layman’s Guide to Medical Malpractice would like to help set the record straight. In his book, first published in 1990, Remakus attempts to define the term by cleverly using hypothetical cases to demonstrate what is and what is not malpractice. He analyses the role of the judicial system, legal profession and insurance industry in claims and offers suggestions as to what readers can do to end this “epidemic.” His continued use of “epidemic” is very purposeful. His goal is to get readers to see malpractice as a sickness in America. The book is very much for the layman. Remakus points out that the medical and legal communities use specialized vocabularies to discuss malpractice. This jargon confuses and excludes the average American from the conversation. So Remakus breaks down concepts and uses terms readers can understand. Since Dr. Remakus has been through years of education, training and spent years working with patients and families, he has seen what the malpractice “epidemic” can do to communities, the medical profession and individual doctors who are engulfed in malpractice claims/suits. At this point, readers should know that Dr. Remakus is very clear about concepts, terms and the purpose of his book (which appears to be to clarify what is and what is not malpractice). Dr. Remakus asks readers to consider National Health Insurance. Under such a program, physicians would be employed by the federal government. Judicial, legal and insurance groups would have limited involvement in malpractice claims. 'By adopting such a program, the United States would be setting the greatest standard in health care delivery ever known to mankind. At the same time, it would be putting an end to the most disgraceful mockery of justice this country has ever experienced.' Overall, Remakus does a great job of breaking down malpractice for the layman. He challenges readers to consider the strain today’s health care system puts on our society and definitely puts ideas on the table that are appropriate to be thinking about, especially during this critical time when Americans begin to feel the impact of the Affordable Care Act." - PORTLAND BOOK REVIEW"The Malpractice Epidemic is a valuable primer in any serious discussion of the growing medical liability reform debate. A copy should be in every legislator's office." ROBERT V. DAVISON, ESQ., former senior advisor to the U.S. Secretary of HUD "The Malpractice Epidemic takes readers behind the scenes of medical malpractice and accurately portrays the interaction between doctors, lawyers, patients and courts. It should be required reading for every American because it shows how and why the system is broken, and what we need to do to fix it." HELEN M. EVRARD, M.D., medical sub-specialist