The Art of Amusing - Being a Collection of Graceful Arts, Merry Games, Odd - Tricks, Curious Puzzles, and New Charades - The Original Classic Edition 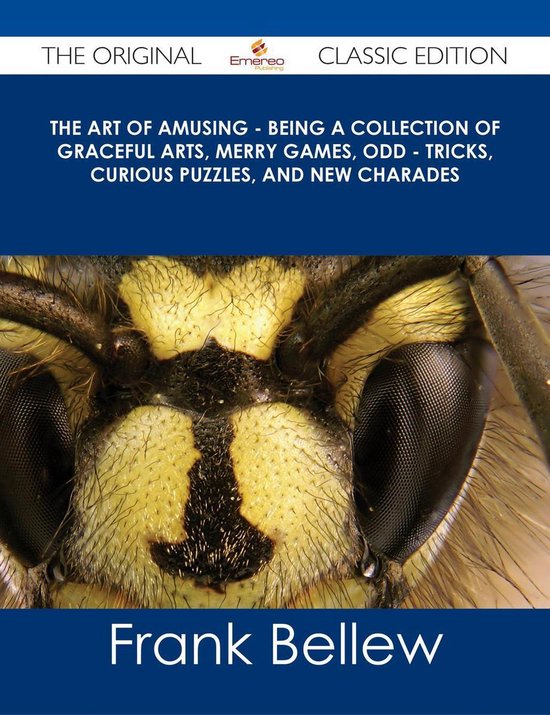 Finally available, a high quality book of the original classic edition of The Art of Amusing - Being a Collection of Graceful Arts, Merry Games, Odd - Tricks, Curious Puzzles, and New Charades. It was previously published by other bona fide publishers, and is now, after many years, back in print.


This is a new and freshly published edition of this culturally important work by Frank Bellew, which is now, at last, again available to you.


Get the PDF and EPUB NOW as well. Included in your purchase you have The Art of Amusing - Being a Collection of Graceful Arts, Merry Games, Odd - Tricks, Curious Puzzles, and New Charades in EPUB AND PDF format to read on any tablet, eReader, desktop, laptop or smartphone simultaneous - Get it NOW.


Enjoy this classic work today. These selected paragraphs distill the contents and give you a quick look inside The Art of Amusing - Being a Collection of Graceful Arts, Merry Games, Odd - Tricks, Curious Puzzles, and New Charades:


We have seen, ourselves, in England, in a stately old castle, a party of lords and ladies—for we, like the boy who knew what good victuals were, having been from home several times—even we have seen good company—we say that we have seen a party of lords and ladies, knights and dames of high degree, and of mature years, romping and frolicking together, like a lot of children, playing Hunt the Slipper, Puss in the Corner, and Blindman's Buff, without the remotest idea that they had such a thing as dignity to take care of; and no one seemed to have the slightest fear that any one of the party could by any possibility do anything that would offend or mortify any one else. ...One group got into conPg 22versation about the dragon, the dragon led to fabulous animals generally, fabulous animals to antediluvian animals, these to pre-Adamite animals, and so in a few minutes they were found deep in the subject of Creation; whilst the group next to them, owing to some one's having conjectured whether my friend's piece of sculpture could walk, and some one else having suggested that it might be made to do so by means of clock-work or steam, had got on to the subject of machinery, modern improvements, flying-machines, and were away two thousand years off in the future, making a difference of no less than ten thousand years between themselves and the other party. ...The performer presented a pack of cards to one of the audience and begged him to select a card; this the performer then took in his own hand, and carried it with its face downward, so that he could not see it, and placed in the middle of the floor of the stage; he then produced a large brown-paper cone, and placed it over the card, and commenced talking to the audience, telling them what he could do and what he could not do: finally he informed the audience that he could make that card pass to any place he or they chose to name.