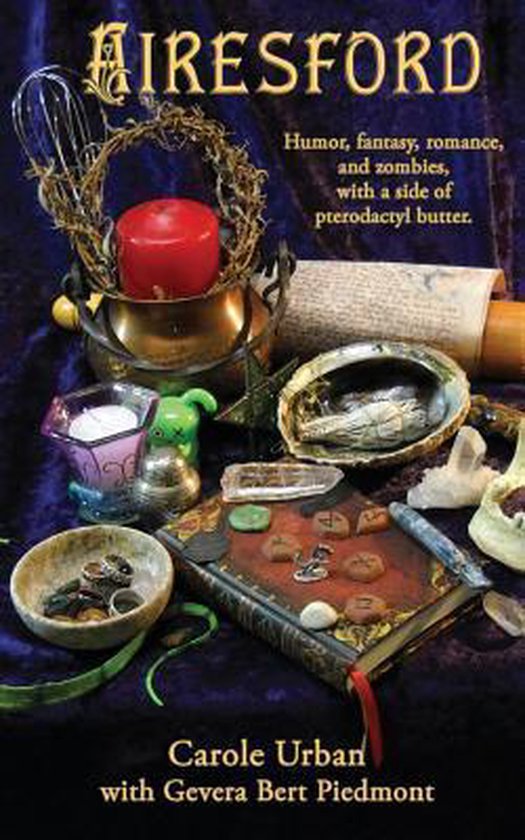 Airesford, a place of good magick and good eatin'.
Humor, fantasy, romance, and zombies, with a side of pterodactyl butter.
How had she ended up living in some alternate-reality corner of England, half in love with a gay vampire?
Twenty-seven year old Laura Corben is a typical American Neo-Pagan, working in a new age shop, when an old man comes in and says he’s her long-lost grandfather. He wants her to come home, to what she thought was a childhood fantasy. This place, of myth and legend and fine cooking, concealed in the mists west of Glastonbury, south of Pwllheli, left at the roundabout, past Minnie’s Tasty Tarts, is Airesford, where long ago dragons, unicorns, and talking lizards found refuge beside spell-casters, rune-readers, and fry cooks. At Candlewick Castle, she is introduced to a bewildering array of sorcerers, sorceresses, masters, apprentices, pastry chefs, cafeteria cooks, witches, viceroys, the jousting team, novices, sauciers, spell-slingers, and discordians. Not only does she have to buy a new felt wardrobe, she also has deal with her own growing magickal abilities and confront the myriad magickal creatures of Airesford, not the least of which is snarling (but handsome in a creepy vampire way) alchemy Master Cedrus Narke, who is apparently trying to kill her.
How had he so offended the gods that he should be smote with her and her lack of life signs?
Enigmatic Cedrus Narke is Airesford’s youngest ever alchemy Master. No one who knew him would ever make the mistake of thinking he was romantically available, or even desirable, and that’s just how he likes it. No puzzle is too small to for him to solve, no annoyance too small to overlook, and the new crystal teacher Laura is both puzzling and annoying. She has a disappearing aura, she chews gum constantly, she is American, she is hiding something. He just knows she is a fraud and a spy, sent to destroy his homeland from within, and he will stop at nothing to prove it. All of Airesford depends on his finding out what type of mayhem this clumsy, soft American is planning. But when he drags her into the forbidden tunnels beneath Candlewick Castle, his worse fears are realized.
On the Eve of Beltane, evil acquired the strength to get up and have a look around
Kalimot, an ancient lich, is ready for another run at Airesford after a hundred year nap. A sorcerer of the fifth element, he was forced out of the four-element alliance that created Airesford long ago, and he vowed eternal revenge. With his loyal but incompetent guards, a zombie army of unwilling volunteers, a giant cauldron, and a large pot of rubber cement, Kalimot is ready to march across the mountains, if only he can overcome an ever-worsening series of seizures threatens his bodily integrity as well as his ability to rule.
Live together, die alone
The four elemental clans of Airesford must unite to fight this ancient evil, or succumb to the Kiss of Kalimot and become part of his zombie army. Now it is up to a ragtag group of instructors, chefs, gardeners, cleaning staff, gnomes, dwarfs, potion dealers, line cooks, instructors, students and even viceroys, not to mention hyperactive children wearing antique armor, to defend Airesford against Kalimot, his guards, and his zombies.