If You've Forgotten the Names of Clouds, You've Lost Your Way 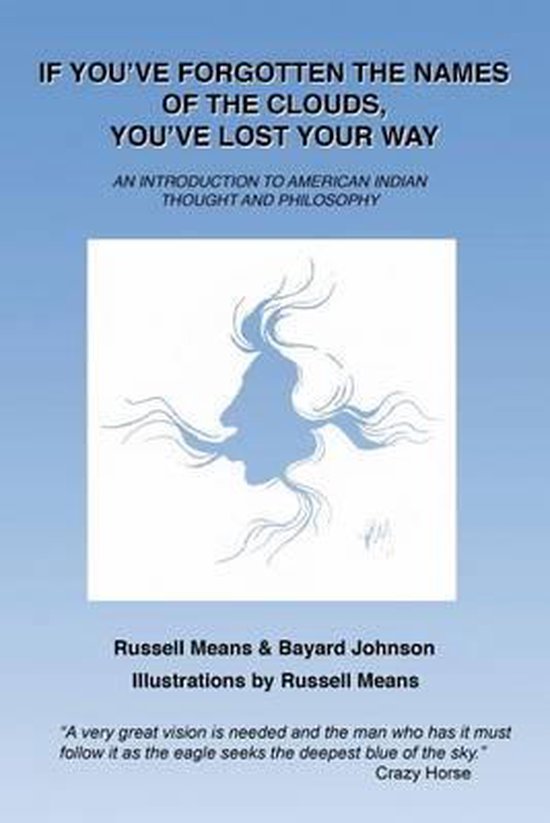 In the last months before leaving to join the Ancestors, Russell Means felt the need to record in permanent written form many of the beliefs and traditions that he was taught as a boy and as a young leader of the American Indian Movement.Russell believed that this knowledge was in danger of being lost forever. His teachers were Traditional Indians, many of whom were born in the 19th century. These Elders were born into a different time and world, when traditional Lakotah freedoms and complete sovereignty were a personal memory for many.Co-written by Bayard Johnson (author of "Damned Right"), "Clouds" takes the reader on a journey into the intriguing and little-understood belief system and world view shared by many American Indians and other indigenous people around the world.The American Indian way of living has almost nothing in common with the patriarchal philosophies and religions of Europe and Asia, and this book helps explain the violent clash of cultures that continues to erupt between indigenous and industrial societies whenever they come into contact anywhere in the world.Few Lakotah of our time heard the true account of their people's beliefs directly from Elders who were born free, whose earliest memories pre-dated the fencing of the Plains and the imprisonment of the Lakotah people and culture. Russell Means was one of these.As a young leader of the American Indian Movement, which helped resuscitate Indian nations throughout the hemisphere, Russell had the privilege of learning traditional Lakotah ways and knowledge from Elders who were steeped in these ancient teachings. It was Russell's intent to pass on this timeless and timely wisdom to a world starved for balance and truth.This book is a concise and comprehensive encapsulation of the Traditional Lakotah world view. The Elders who gave Russell these cultural insights and values were never educated in the white man’s systems. The words are those of an Indian telling his own people’s story, not those of an anthropologist striving to understand an alien culture and belief system. Much of this information is available nowhere else.The knowledge is broken down into numerous categories, beginning with the Ancestors and the Matrilineal system common to most indigenous people around the world, and concluding with perspectives relating to the future. The book also contains drawings done by Russell Means, a renowned artist.European and Euro-derivative societies have never clearly understood the fundamental ontological and cosmological beliefs of the American Indians, nor those of other Indigenous societies, and this lack of understanding has led to centuries of misunderstanding, disrespect, genocide, and oppression. The knowledge in this book can help correct this tragedy. Industrial societies have an opportunity to become familiar with an almost diametrically opposed belief system which has never led mass populations into sociopathic practices like genocide and destruction of their own environment.