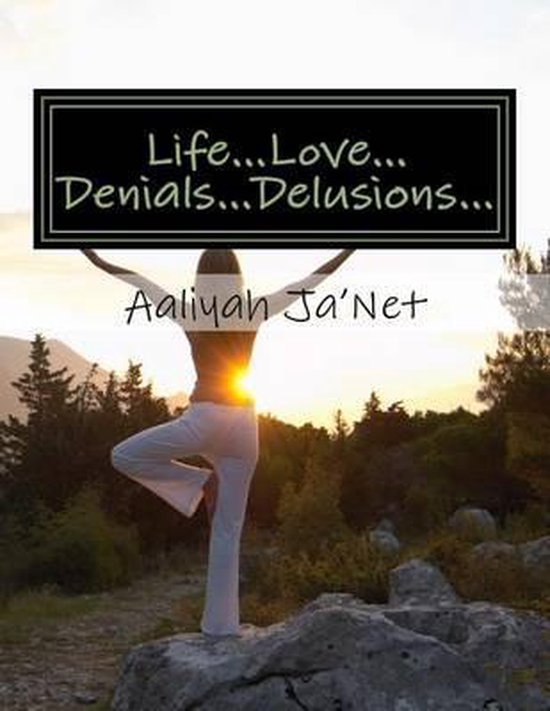 Life…Love…Denials…Delusions… is about a book of Urban Poetry and Short Stories about Erotica and Past Life Regression. With her personal experience of loss, Aaliyah Ja’Net expresses the harsh realities of life. In her poem ‘A Letter to My Love Angel’, she speaks on losing her best friend in a car accident. She didn’t even know until 3 years later when she realized she was in love with him and reached out to let him know how she felt. His mother called and her and told her he was dead and it shattered her heart into a million pieces. Nothing could have prepared her for that. In ‘A Little Niggahs Life’, she talks about a conversation she had with one of her friends whose mother was addicted to crack all his life. She took that conversation and penned a vivid masterpiece that leaves the reader speechless. In ‘The Life of a Black Woman’ she discusses the desires, the day to day thoughts of a young black woman and the life she craves. Love is beautiful but it has taught this poet many lessons. There are the dreams of the love she desires; in the poem ‘A Peek’ she describes the vision/dream she had about the love of her life and the ‘not of this world’ feeling that came with it. The way she describes the touch of her lover and the connection she shared with him, makes the reader want to experience it for themselves. In ‘A Letter To God’ she talks about the pain of heartbreak and how a man she dealt with behind bars hurt her and shattered her world in less than 24 hours after being released. ‘You should’ve been mine’ talks about her connecting with a close friend whom she eventually fell in love with but could not be with because of his relationship he had at the time with his daughter’s mother. ‘The Sweetest Taboo’ is a poem about the first time she ever heard the classic hit by legendary singer/songwriter Sade. She describes how the melody and words of the song touched her soul and captivated her, making her a lifelong Sade fan. Denial is something everyone experiences and goes through at some point in their life and Aaliyah Ja’Net is no different. In the poem ‘Dope Boy’ Aaliyah is speaking her mind to someone she loved, that got out of prison and went back to selling drugs. She realizes he is in the streets and as a result there is no hope for them. The Denials and Delusions come in when Aaliyah doesn’t want to believe the things she has gone through in love. She knows she has lost some people from her life and they will never be in her life again but she hopes and then the realization comes. She realizes she only has herself and that she was played. Now she has to start her healing process. In ‘My Future Husband: Where are you?’ she speaks on how she is tired of people singing and talking about love when she has yet to find it. She explains the kind of man she wants and how she knows at some point, he will show up but it simply is not fast enough! In ‘A F****d up situation’ she talks about a young girl disrespecting her in regards to the young man she held down during his last 18 months of prison. The young girl was the rebound chick and pops flyy out the mouth at Aaliyah but Aaliyah wasn’t having it. Somehow she still loves him and still hopes he loves her at this point. Delusions of Grandeur for sure! In another poem called, ‘Lost Ones’ she puts a new spin on the song rapper Jay-Z made popular. She talks about losing her best female friend, her best male friend and the man she held down in prison. She talks about how their relationships started and ended. The poem, ‘Grass is Greener’ is also a realization of the heartbreak and having to move on from an old flame who cheated and left her for another woman. In Aaliyah’s short stories, ‘Another Life’ and ‘Old China Part One’ she recounts the dreams she has had that she believes were past lives of hers.Aaliyah Ja’Net’s raw and uncut style never fails and delivers every time. Aaliyah not only leaves her heart in this book but her soul as well!!!