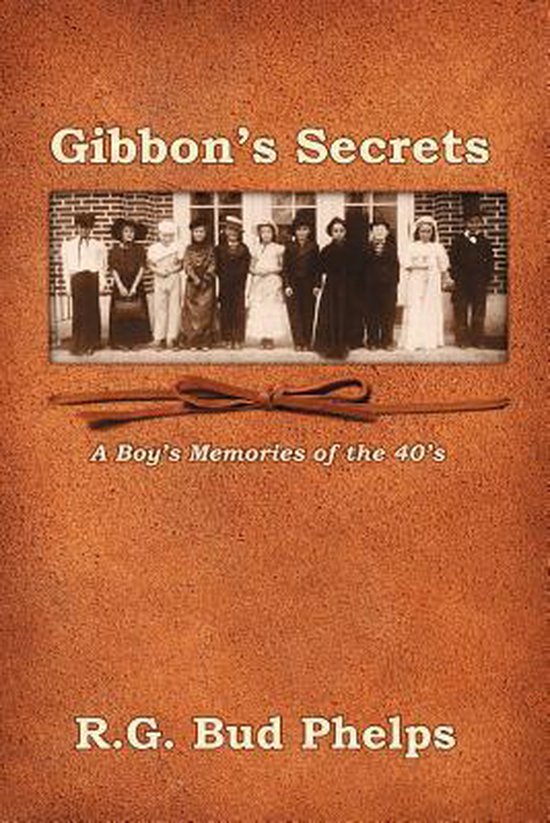 "Gibbon's Secrets" is a story about 'A Boy's Memories of the 40's'. In the story I am sharing some of the true incidences that happened to me and my four friends as we were growing up in the small town of Gibbon Nebraska. I have classified the story as fictional to give me the opening to expand my memories a bit and to add some fictional happenings to bring out the possibilities of growing up with World War II in the background. My father, Reg Phelps, left me several scrap books containing the headlines and pictures from local newspapers about World War II. I have developed a time line of highlights from the battles for each year in the book starting in 1940 and ending in 1945. I am Bud, the main character in the book, and you will be able to pick me out of the cover picture as the boy the 5th from the left with a jaunty straw hat. Other pictures I have included in the back of the book were actual photographs of houses and places featured in the book. As an added feature I have included, as a Postscript, shared memories from Frank Chambers about his experience during the "Battle of the Bulge". My friend from Gibbon, Duncan McGregor, gave me copies of various elementary school programs which I have used as part of the story. As an example: On December 15 1941 the Gibbon Grade School presented their Christmas program that they had been working on well ahead of the attack on Pearl Harbor on December 7th. The crowd of people in attendance for this "Christmas Carol Program" started the evening with heavy hearts, but left the auditorium with smiles on their faces. They were all thanking the Lord for the innocence of these Gibbon Grade School students, and the joy they brought to everyone this night. Read and enjoy my enhanced remembrance of the 40's.