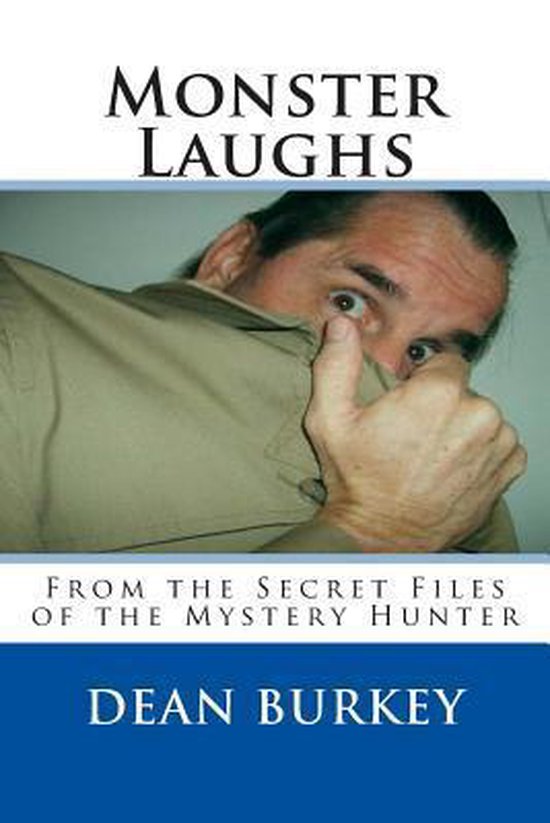 “MONSTER LAUGHS”From the Secret Files of the Mystery Hunter-- Funny fiction from the Author of "Seasons Without Reason" and "Exit Strategies": Dean Burkey.-- Fear not, laugh a lot, as Paranormal Investigator Eddie Hunter, a.k.a. the Mystery Hunter, matches wits with Count Dracula, the Werewolf, Frankenstein’s Monster, and many other madcap menaces, classic and new, from around the world and beyond. -- “Monster Laughs” spoofs monsters and more. Each hilarious chapter of this epic comedy novel stands on its own, while a story weaves its way throughout. No matter how dangerous the situation, the Mystery Hunter keeps his sense of humor, somehow survives, and finds time to enjoy waffles, pie, and bowling. Only he could save the world with bubble gum and burritos. -- In an Odyssey of Oddities, comedian Dean Burkey tackles the Invisible Man, Space Aliens, and other infamous frights. Further scary topics include romantic misunderstandings, macho insecurities, & diminishing dignity. * "In my line of work, nothing’s more embarrassing than when the monster laughs." -- Edward T. Hunter, Paranormal Investigator.Check out these hilarious, adventurous chapters: * "Count Dracula Sinks His Teeth into the Big Apple" -- To stop the villainous vampire, the Mystery Hunter puts his neck on the line! * "The Howling Werewolf’s Hairy End" -- Bring Your Pet to Work Day has never been so deadly! Or so itchy.* "Frankenstein’s Monster Bolts Loose" -- Big and green, mighty and mean, the most menacing monster the Hunter’s ever seen. (So far.)* "Doctor Jekyll and Ms. Hyde" -- Double the pleasure; double the danger! And with the Hunter involved, double the laughs and mishaps!! And double the indignities and insecurities!!!* "Unraveling the Mystery of the Mummy" -- The Mystery Hunter faces more horrors than he’s ever imagined. Is the Mummy out for revenge? Or just running a pyramid scheme? * "Skinny Dipping with the Creature from the Blue Lagoon" -- Cannibals, pirates, and sharks, oh my! Also, lost treasure, a whale, a gorilla, a navy seal, and a couple grabby blue crabs. And let’s not forget the web-footed horror of the amphibious Creature! Does the Creature want to kill the Hunter? Or are his desires a fate worse than death? What else would you expect during mating season at the Blue Lagoon? * "The Swinging Tale of the Blue Moon Monkey Man" -- The Mystery Hunter encounters a new menace. Before he gets himself killed over a blue banana, the Hunter better solve this case and split! * "Illegal Aliens from Outer Space" -- Worlds turn against the Mystery Hunter, including his own! The galaxy cries out: “Bring me the Hunter!” * "Being Seen with the Invisible Man (Or Not!)" -- Although he prides himself on always being prepared, the Mystery Hunter never saw this one coming! * "Challenging the Unchallengeable Charlie Change-O" -- The Final Chapter! Home from a whirlwind, worldwide tour of mystery-hunting, Eddie faces his fiercest foe and solves a mystery he wishes he’d never solved. * "Return of the Blue Moon Monkey Man (And Another Crazy)"-- The Final, Final Chapter! A fiendish foe returns. So does another crazy. And the Hunter makes a monstrously horrifying realization about himself. * Zany, quirky, funny, fun. For teens and adults.