He Killed Our Janny 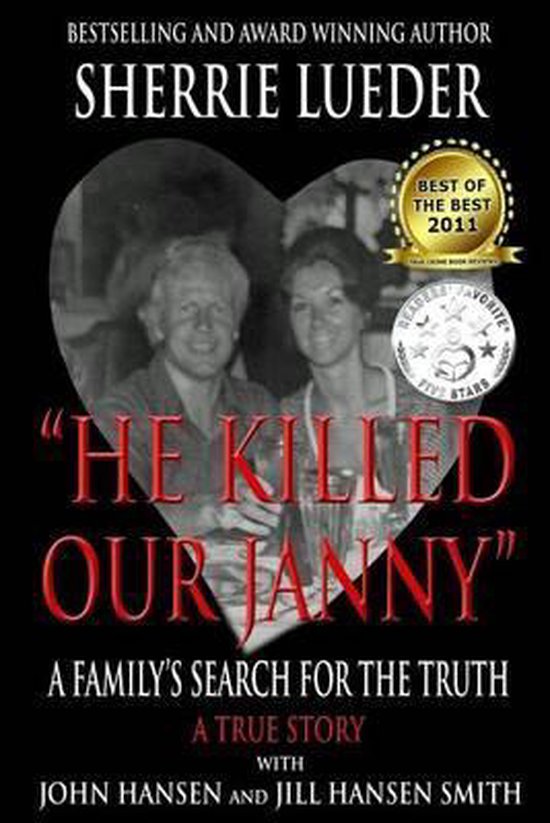 Winner of Top 10 True Crime Book Awards 2011 http://truecrimebookreviews.com/2012/01/and-the-winners-are/BESTSELLING AND TWO-TIME AWARD WINNING AUTHOR, SHERRIE LUEDER'S GRIPPING TRUE STORY OF A SON AND DAUGHTER'S PAINFUL MEMORIES AND FIGHT FOR SURVIVAL WHILE GROWING UP IN AN ABUSIVE HOME IN THE SUBURBS OF DENVER--AND THEIR OWN INVESTIGATION INTO THEIR MOTHER'S DEATH--WHICH LEADS THEM INTO A RELENTLESS QUEST FOR JUSTICE This book is the first to explore the mysterious death of Janyce "Janny" Hansen, a former top model from Denver, Colorado. She, along with her husband and children, live in an upscale home in the suburbs. The community sees an affluent, glamorous family. The reality is far different. An abused wife who can't let go. A husband who beats and sexually assaults his adopted children--while running gambling and prostitution businesses from their home. In the early morning hours of September 21, 1984, her husband returns home to discover her lifeless body in his Mercedes convertible parked in the garage--or so he says. Her family is led to believe she committed suicide. Now, 25 years later, her son and daughter set out to prove she was killed by her husband, a successful real estate developer rumored to have strong ties to city officials and underworld crime. Many believe the investigation into Janny's death was a cover-up--starting with the coroner's office--and that her husband got away with murder. As our investigation continues, we are led to believe our suspicions are true. Especially, since evidence increases almost daily and points to only one killer--Janny's husband. "HE KILLED OUR JANNY" REVIEWS:"This book evoked so much emotion from me -. . . . In her new book author Sherrie Lueder recounts the life of Richard and Jaynce Hansen, as told to her by two of Janyce's children and Court documents. "He Killed Our Janny" doesn't read so much like a book, per se, but more like written account of a friend's story. It was a pleasant change from the textbook-style of many of today's writers. When I was reading, I didn't want to stop; when I had to put it down, I couldn't wait to get back to reading. I wanted to know the ending. . . . Book voyeurs who are able to tackle tough subject matter will love "He Killed Our Janny" by Sherrie Lueder." --Kim Cantrell TRUE CRIME BOOK REVIEWS“Heart-wrenching books like 'He Killed Our Janny' (Creat Space 2011) often purport poignancy and vivid realism. As well it should. As a matter of fact, it's one of the most impactful true crime stories of our time according to True Crime Book Reviews (http://truecrimebookreviews.com). . . . The book was first reviewed by TCBR on December 16, 2011. The literary group then galvanized the captivating, 'He Killed Our Janny' as one of "2011's Top 10 True Crime Books --Best of the Best 2011" on January 20, 2012. . . .” --Fran Briggs Accomplished and Award Winning Writer, Author, Educator, Professional Private Investigator, and Key-Note Speaker THE FRAN BRIGGS COMPANIES“Fueled by the frustration of decades of a criminal cover-up, the siblings go forth to unravel the truth with their own investigation… The story is told to, and brilliantly put together by bestselling author, Sherrie Lueder… Let's talk literary excellence: on the heels of being awarded 'Best of the Best of 2011 True Crime Book Reviews' is the release of the official He Killed Our Janny trailer. The clip is enthralling. . . . The trailer looks like the book could be really good - and it is. Can't wait for the day I watch it on the big screen.” --Fran BriggsBOOK TRAILER: http://www.youtube.com/watch?v=XaU7j-JMTNI