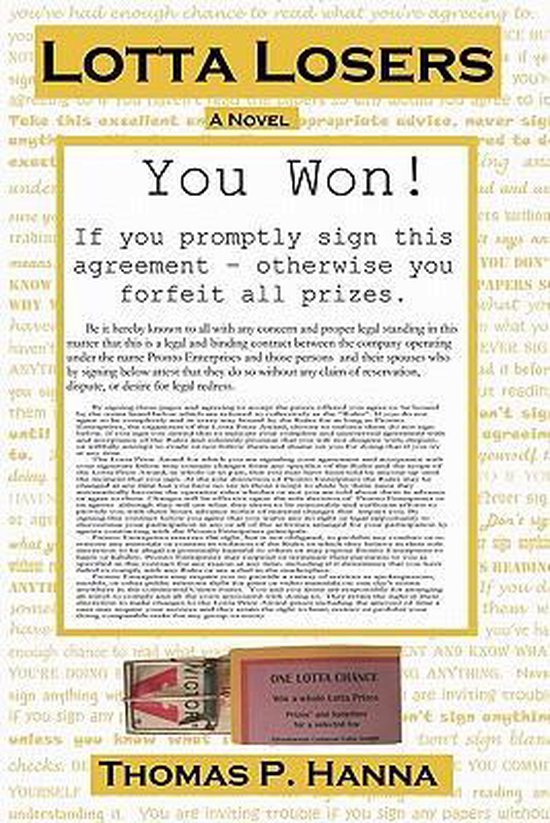 Yippie O’Rourke roams a parking lot only selling chances in a private lottery-type contest called the Lotta to carefully selected people - including sixtyish couple Maddie and Jake Dullboy.Driving home, Maddie decides the Lotta is a rip-off and insists that Jake take her to get her money back - but for a time they can’t find O’Rourke despite Maddie’s determination. When they finally do find him, Maddie demands her money back - but when told new prizes are being added to the pot she stays in. Those behind the Lotta scheme, Norman Axelrod and Sarah Portmann, shop hidden-camera pics of the Dullboys to Ad people who like the couple as ordinary-to-a-fault models. Instructed to do whatever it takes to keep Maddie, “the face of Mrs. Everyman”, in the game, O’Rourke adds items he finds in the company office as prizes - two State Lottery tickets, a statue, and the deed to some probably worthless land. Maddie searches out O’Rourke again to get her money back but is told she’s won – if she sign papers covered with tiny print immediately, otherwise she forfeits the prizes. She signs without even trying to read them. She won!Maddie and Jake are confused to find that the initial money prize payout turns out to be a trivial sum. They also doubt that the contract can mean what it seems to say - that the Dullboys must pose for print and video ads for a token payment with all other payments going to Axelrod and Portmann - but the Dullboys must pay all costs of the shoots. But those are indeed the terms of the contract she signed. Their first modeling job is for a print ad. This ends with the photographer threatening Maddie with a knife, grabbed by police, and paying the costs of the shoot so the Dullboys won’t press charges.Axelrod and Portmann didn’t check the fine print of the revised contract and only now learn that the Dullboys got the statue (now reported to be worth a large sum) and the deed (which is potentially valuable when plans for a development project are announced that will need that land). On a TV call-in talk show the Dullboys are shocked to find little sympathy from the audience for them signing papers without reading them.Since the law won’t help them, the Dullboys decide to become too much trouble for the Ad people to deal with so the demand for them will end. Under this plan they progress from arguing ineffectively with photographers and video directors to providing only third rate snack food for the crews – which proves to be a successful move. O’Rourke, now being openly cheated by Axelrod and Portmann too, agrees to help the Dullboys turn the tables. He suggests they steal the shysters’ copy of the contract and destroy it. Maddie and Jake become cat burglars - but in the morning, too honest to live with stealing, they return the papers to the safe where they got them, undetected.Axelrod and Portmann, the man who sold them the land, and the woman who sold them the statue, all separately jump through hoops trying to persuade the Dullboys to part with those - or to steal the items from them when persuasion, lies, and demands don’t work. None succeed. Maddie and Jake decide this is all too much trouble and announce that they will work for free for any company that the others offer their services to so at least that pair won’t profit from them.O’Rourke alerts the Dullboys that a State lottery ticket they won in the Lotta is a winner worth millions.Axelrod and Portmann try to declare the Lotta void so they can reclaim that ticket, then claim that since the contest was probably illegal its terms are unenforceable and they still own the prizes - but an attorney for the state disagrees and says the Dullboys keep all those. So when the dust finally settles the Dullboys are winners, rich from the State Lottery that they wouldn’t have bought tickets for, and everyone who played tricks has a comeuppance. They are now a bit, but only a bit, warier about signing things without reading them.