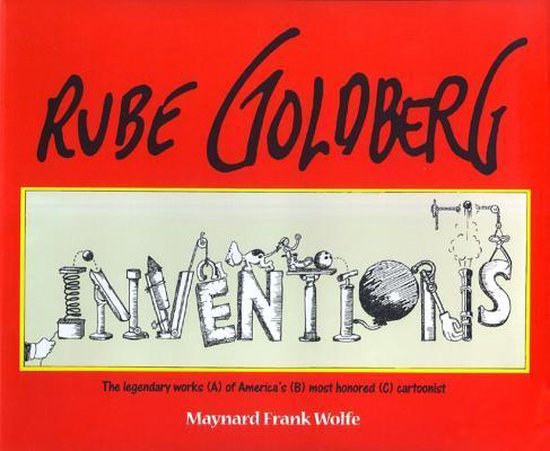 Welcome to the world of that archetypal American, Reuben Lucius Goldberg, the dean of American cartoonists for most of the twentieth century. For more than sixty-five years, Rube Goldberg's syndicated cartoons -- he produced more than fifty strips -- appeared in as many as a thousand newspapers annually He was earning a hundred thousand dollars a year...in 1915. He wrote hit songs and stories and was, in succession, a star in vaudeville, motion pictures, newsreels, radio, and, finally, television. He even, at the age of eighty, began an entirely new career as a sculptor, and, in inimitable Goldberg fashion, was soon selling his work to galleries, collectors, and museums all over the world. Sure, Rube won the Pulitzer Prize. Every year some cartoonist wins the Pulitzer Prize. But the National Cartoonists Society named its award -- the Reuben -- after you-know-who. But it was Rube's Inventions, those drawings of intricate and whimsical machines, that earned Rube his very own entry in Webster's New World Dictionary: Rube Goldberg...adjective...Designating any very complicated invention, machine, scheme, etc. laboriously contrived to perform a seemingly simple operation. Inventions, even the earliest ones that date from 1914, are still being republished and recycled today as they have been over the last eighty-five years. New generations rediscover and enjoy them every day, even though their creator cleaned his pens, put the cap on his bottle of Higgins Black India Ink, and cleared his drawing board for the last time almost thirty years ago. The inventions inspired the National Rube Goldberg (TM) Machine Contest, held annually at Purdue University, an Olympics of complexity in which hundreds of engineering students from American universities and colleges -- and even middle and high schools -- compete to build and run Rube Goldberg invention machines that perform, in twenty or more steps, the annual challenge. In 1970 the Smithsonian Institution hosted a show honoring Rube Goldberg's lifework. In a life filled with superlatives, it hardly needs mentioning that Rube is the only living cartoonist and humorist to have been so honored. In his speech at the show's opening, Rube said, Many of the younger generation know my name in a vague way and connect it with grotesque inventions, but don't believe that I ever existed as a person. They think I am a nonperson, just a name that signifies a tangled web of pipes or wires or strings that suggest machinery. My name to them is like spiral staircase, veal cutlets, barber's itch -- terms that give you an immediate picture of what they mean... So welcome to a collection of spiral staircases and veal cutlets -- to the inventions of an American original, a creative genius named Rube Goldberg.