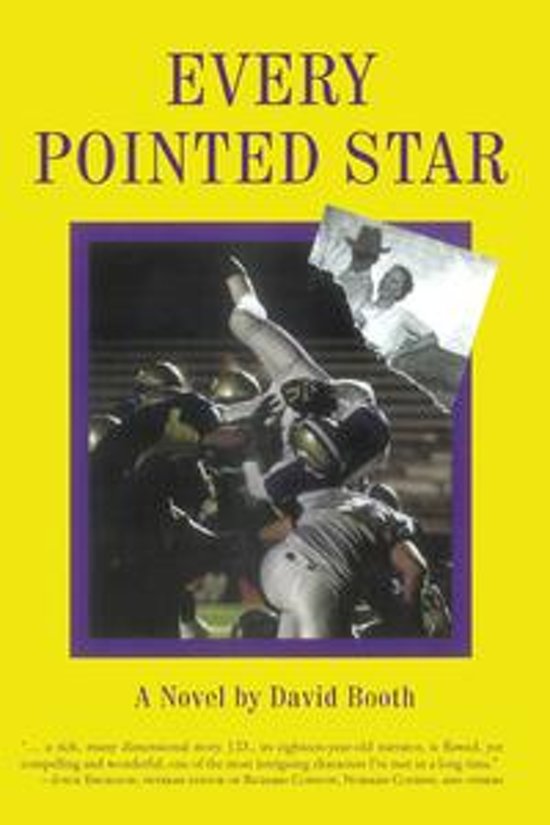 In Every Pointed Star, David Booth tells the interesting, sometimes funny, oddly moving story of J.D., a gifted football player who goofs his way through high school and expects to do the same in college. But J.D.s questionable choices provoke a violent event with wide-ranging aftershocks that force him to look deep into himself and into the lives of his parents. Without recognizing whats happening, he begins to develop an inkling of the depth and significance in the silent lives of others and perhaps even in himself; simultaneously, circumstances may be turning J.D. in the direction of finding his voice as a writer.


a rich, many dimensional story. J.D., its eighteen-year-old narrator is flawed, yet compelling and wonderful, one of the most intriguing characters Ive met in a long time.


beautifully written and tight in its construction; Every Pointed Stars themes of muteness, secrecy, and fear of revelation are subtly presented Good unraveling of the plot and very nice finish.


There are not many true voices of eighteen-year-old boys in current young adult fiction, but in J.D., David Booth has created a memorable one. Full of moral confusion and self doubt, forced to make critical choices without input or support from his cold and secretive parents, J.D. stumbles toward maturity. Along the way he finds (for the first time) friends, perhaps a girl and something like a life of the mind. A good read with a satisfying conclusion.


the best literary sports fiction Ive read since Irwin Shaws 1955 classic, 'The Eighty-Yard Run'; but Every Pointed Star is far more than sports fiction. It's for anyone looking for a smart, creative, insightful novel thats fun to read.

Gene Knight, longtime English teacher and coach, former defensive back at the University of Oklahoma, Inductee into the National Wrestling Hall of Fame.


Foreword Clarion Reviews says 5 stars out of 5 and:


''Moving and consistently enjoyable, Every Pointed Star follows eighteen-year-old J.D. Johnson as he struggles along his particularly rocky road to young adulthood. Secrets, lies and self-doubt are just some of the obstacles in his path, and his journey to overcome them results in a memorable and rewarding read.


An only child, J.D. is largely ignored by his parents. His mother is selectively deaf, his father purposely oblivious. They are so removed and distant from him and each other that he never even receives a good night from his father, who shares his room. I always figured that I mustve done something to disappoint him, and her too, but I couldnt remember what it was, J.D. says. Maybe it was something so bad I wouldnt let myself remember it. Or something that happened so long ago I couldnt remember it.


A loner in high school, J.D.s only outlet is football, at which he succeeds primarily through cunning deception, a method carefully (if unethically) encouraged by his coach. A scholarship leads J.D. to college where his penchant for deception proves an unreliable crutch both athletically and academically. A violent consequence of his actions leaves him with a wired-shut jaw and a great deal of time to reconsider his choices in the past and discover who he truly wants to be in the future. Forced into silence, he learns to listen, and as his body heals, his soul begins to heal along with it. Mysteries are soon solved much as they are in life, leading to a better understanding though not necessarily instantaneous resolution.


By turns as charming and exasperating as any teenager, J.D.s narrative voice is wholly genuine, drawing the reader in and propelling the story. Through authentic use of language and believable actions, author David Booth deftly builds J.D.s character into someone we feel we could both know and like, despite his flaws. Two new friends who are there for him when he most needs theman English professor who inspires subtly and brooks no nonsense from his students, and a mysterious former college football starplay roles in J.D.s eventual metamorphosis into a young man with the courage to face difficult truths and become who hes meant to be.


With a clever first-page hook that grabs the readers attention, Booth skillfully crafts an affecting and satisfying coming-of-age story filled with humor, angst and hope. Readers will find themselves deeply invested, hoping that J.D.s parents will be there for him, or that he chooses to do the right thing this time, or that the girl hes been admiring in class will turn around and smile at him. Its a rare book that achieves such full engagement of the reader, and a truly exceptional storyteller who can inspire it. With Every Pointed Star, Booth does so to perfection.


Readers looking for a compelling and sensitive book that can move them to both laughter and tears with equal enjoyment would be wise to choose Every Pointed Star. Very highly recommended.''