Smokin' in the Boys' Room 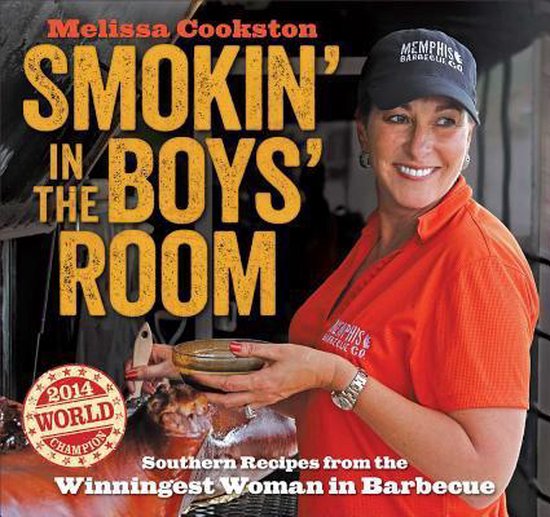 Top pitmaster and restaurateur Melissa Cookston, 2014 Memphis in May Whole Hog World Champion, two-time overall world champion and the winningest woman in barbecue, presents Southern Delta and barbecue recipes full of smoke and spice, as well as stories filled with the trademark fire and vinegar that make her a TV favorite, too.

One of the world's top pitmasters and the 2014 Memphis in May Whole Hog World Champion, Melissa regularly smokes the competition on the barbecue contest circuit. Now, you can enjoy some of her best recipes for not only the barbecue that has made her famous, but also for baked and fried favorites, oh-so-good sides, and decadent desserts that will stick to your ribs.

In Smokin' in the Boys' Room, Melissa shares the inspiring story of how she got into barbecue and worked her way to the top with grit and determination, even becoming known for smoking a whole hog like no one else--an uncommon feat in the barbecue world. She also shares tips and tricks for turning out great meals from the grill, from Slow-Smoked Competition Brisket, to Fire-Grilled Pork T-Bones with Hoe Cakes and Mississippi Caviar, and even Grilled Pineapple Upside Down Cake. And no true Southern cook would be without her Buttermilk Fried Chicken, BBQ Shrimp and Grits, and Red Beans and Rice.

The recipes cover the gamut, from sauces and seasoning blends, to pork and bacon, beef, poultry, and seafood, as well as a few sides and desserts to round out the meal. Some are traditional favorites wherever you may live, and others are true to Melissa's Delta roots. Many have won contests, and all are top-notch, having been honed to perfection in competitions or in the kitchens of Melissa's restaurants, Memphis Barbecue Company.

Whether you're a contest veteran or just getting started, there's something for everyone inSmokin' in the Boys' Room. As Melissa can tell you, anyone can learn to man the grill. To be really good at it, it just takes a little work and a little attitude.