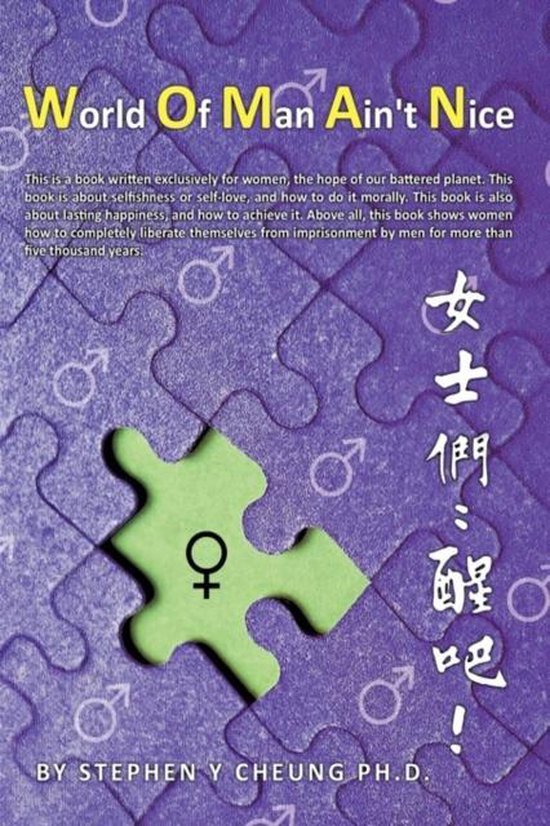 I believe in causal connection. I am convinced that I was a S.O.B. in my previous life and had hurt lots of women. This life is to repay some of the debts. Thus the reason of the book. It is to help to free the hundreds of millions of women who are still under the control of men. For millennia, women have been men's prisoners and slaves. Slavery of women is still going on in many countries. The book traces the slavery to its very beginning and identifies the one-tool men have been using to imprison them. It was a recent event measured in evolutionary scale. Knowing the when and the how will enable the ultimate liberation of all women. Though a stronger sex, there is one universal womanly "weakness." It is an innate sense of insecurity. This "weakness," however, was a must for the survival of our species during the past millions of dark years. Women today have no more need to feel insecure. But it is still there, playing harmful psychological game to women. To know this insecurity is to allow women to deal with it effectively. The book also points out the many potential traps and downfalls to women. The most damaging trap for women is religion. All religions treat women as second-class citizens. The other is to have children. They are career killers. Getting married is also a bad idea. 50% of the marriages in North America end up in divorce and most are initiated by women. Statistics don't lie. W.O.M.A.N. is an acronym for world of man ain't nice. Our world is a mess--wholesale environmental deterioration, wars, over-population and poverty are rampant. They are mostly man-made, by the male gender, that is. Our only hope is woman. The misery won't end as long as men are allowed to run our world. Women are our saviors. But women can't save the world without a tool. The tool is moral selfishness, which is the other central message of the book. Thank you.