Ought American Slavery To Be Perpetuated? A Debate Between Reverend W. G. Brownlow And Reverend A. Pryne (1858) 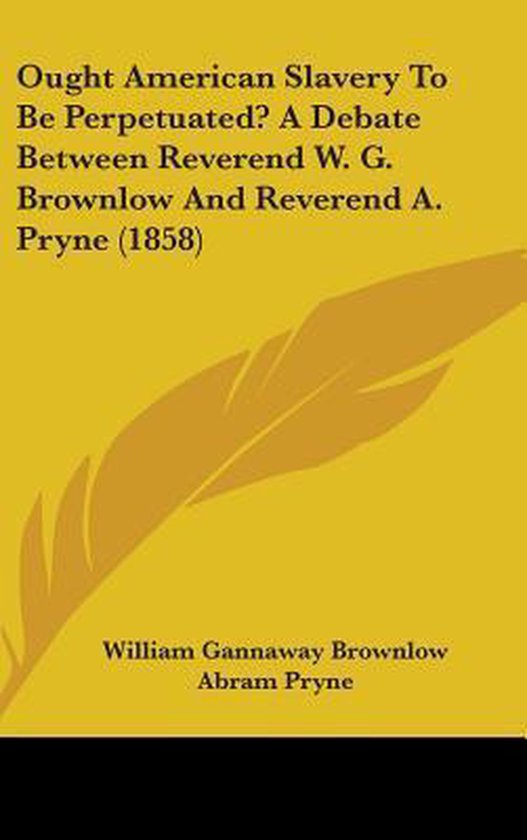 PREFACE. The undersigned herewith introduce the correspondence between them, which gave rise to the debate in which they have been engaged, and which is substantially contained in the following pages. In presenting the following work to the American public, no apologies are offered. Me live under a Government which tolerates liberty of thought, liberty of speech, and freedom of the press and in this ex pression of our honest views and feelings-differing widely as we do - upon the subject of Domestic Slavery in the United States - a subject relating to the general welfare of the country, we are but exercising a right which belongs to every American R citizen. The age of proscription for opinions sake, is4 past, and, as me trust, never again to return. The liberal genius of our free institutions, allows to all unrestricted interchange of thought and sentiment while mens opinions are received or rejected, accord ing as they possess merit or demerit For the imperfections of this volume, the undersigned offer no apology. The Lectures of each mere prepared for the occasion, under the pressure of other important, and frequently distracting avocations. We both claim to have spoken honestly, and with a sincere desire to do good. . One of us a Southern man, the other a Northern man-both prejudiced, as me frankly admit, at least to some extent, in our educations, habits, and associations, in favor of the institutions, and usages of the respective section of the country me hail fromthe reader will appreciate our principles and opinions, as he may deem them entitled to favor. W. G. BROWNLOW. ABRAMPR PNE. PHILADELPH Se I p A t., 14,1858. l PRELIMINARY CORRESPONDENCE. Prom the KnoxvilIe Whig. OURDISCUSSION IN SEPTEMBER. THE reader will see from the following correspondence, that the battle spoken of in many of the newspapers, comes off on Tuesday, the seventh of September, in the city of Philadelphia, between the Editor of this paper and Rev. Abram Pryne, a Congregational minister, and the Editor of an anti-slavery paper, published in McGrawville, Courtland county, New York, styled the Central Reformer. The following challenge appears in his Reformer for March 10, 1858. REV. MR. BROIVNLOTV AND SLAVERY. The public will remember that this gentleman has challenged the friends of freedom in the North to debate with him the merits or demerits of slavery. His very elaborate challenge has not been accepted, unless it be n conditional acceptance, from Frederick Douglas. I now propose to reduce the question to a single proposition, sweeping the entire area of the subject, and in that form I challenge him to its discussion. The proposition I would state as follows - Ought American Slavery to be abolished This question to be reversed when the debate is half through, and to be stated as follows - Ought American Slavery to be perpetuated l 6 IIe may sclect the time and place of holding the debate. I only stipulating that it shall be in the State of New York, and that I shall have four weeks notice between his acceptance of my cliallenge and the commencement of the debate. As my name may not have reached him, I may state that like Mr. Brownlow I am a clergyman, and an editor, and will take the liberty to refer him to Hon. Gerritt Smit, h, Ilon. J. H. Gid dings, Dr. Mark IIopkins, President of Williarns College, and Rev. L. G...