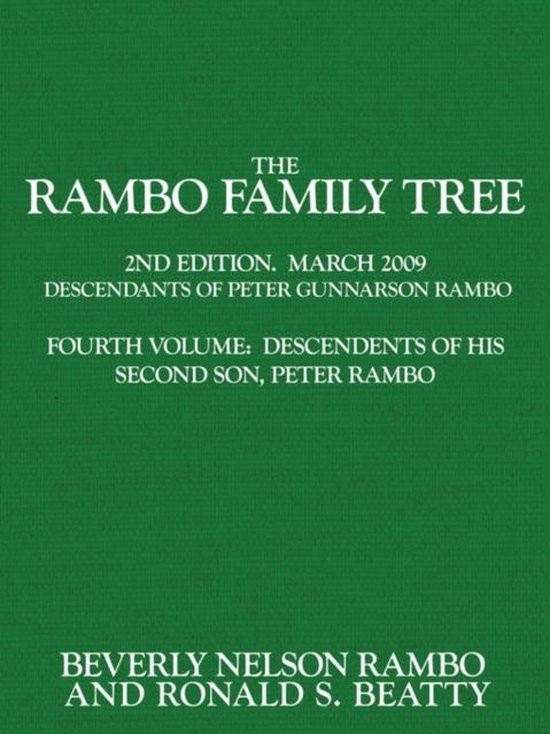 Nearly all of the Rambo families in the United States are descended from one common ancestor: Peter Gunnarson Rambo, a Swedish colonist who landed on the shores of the Delaware River in 1640 at what is now Wilmington, Delaware. This history of the Rambo family describes Peter and his six children and lists their descendants who have migrated into every state of the Union. Some of the family lines have been extended to the 12th generation with their children comprising the 13th generation. Peter Rambo, Peter Gunnarson Rambo's second son, and his descendants are the focus of this fourth volume of the Rambo Family Tree series. Peter was an active member of Gloria Dei Church, became a large landowner, and was a representative of Philadelphia to the Pennsylvania Assembly in 1709. Peter and wife Magdalena Skute lived on Pennypack Creek in Lower Dublin Township now part of Philadelphia]. This volume lists all their children and many generations of descendants although generally no people still living will be recorded herein. Rambo is the primary surname in this book although extended families are recorded by daughters who married Davis, Johnson, Kiger, Roof, Runyan, and Smith husbands. A third edition of this genealogy is being compiled as you read this. Please help to improve this genealogy by sending corrections, additions and improvements to me at rsbeatty@gmail.com. With your help, the third edition can be even better. Thanks. Ron Beatty, October 2009