In Connection With The De Willoughby Claim 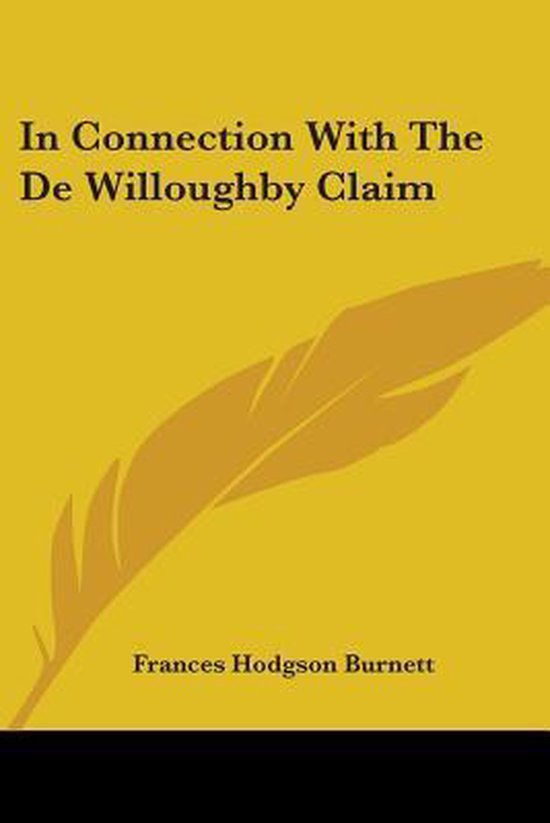 In Connection with The De Willoughby Claim CHAPTER I HIGH noon at Talbots Cross-roads, with the mercury standing at ninety-eight in the shade-though there was not much shade worth mentioning in the immediate vicinity of the Cross-roads post-office, about which, upon the occasion referred to, the few human beings within sight and sound were congregated. There were trees enough a few hundred yards away, but the post-office stood boldly and unflinchingly in the blazing sun. The roads crossing each other stretched themselves as far as the eye could follow them, the red clay transformed into red dust which even an ordinarily lively imagination might have fancied was red hot. The shrill. rattling cry of the grasshoppers, hidden in the long yello v sedge-grass and drouth-smitten corn, pierced the stillness now and then with a suddenness startling each time it brolre forth, because the interval between each of the pipings was given by the hearers to drowsiness or heated unconscious naps. In such napping and drowsiness the present occupants of the post-office were indulging. Upon two empty goods boxes two men in copperas-coloured jean garments reclined in easy attitudes, their hats tilted over their eyes, while sev l In Connection with The De Willoughby Claim era1 others balanced their split-seated chairs against the house or the post-porch and dozed. Inside the store the postmaster and proprietor tilted his chair against the counter and dozed also, though fitfully, and with occasional restless changes of position and smothered maledictions against the heat. He was scarcely the build of man to sleep comfortably at high noon in midsummer. His huge, heavy body was rather too much for him at anytime, but during the hot weather he succumbed beneath the weight of his own flesh. Hamlin County knew him as Big Tom DWillerby, and, indeed, rather prided itself upon him as a creditable possession. It noted any increase in his weight, repeated his jokes, and bore itself patieptly under his satire. His indolence it regarded with leniency not entirely untinged with secret exultation. lhe derndest, laziest critter, his aoquaintances would remark to each otherj the derltdast I do reckon that ever the Lord made. Nigh unto three hugdred he weighs, and never done a lick 0 work in his life. Not one Lord, no Tom DWillerby work I guess not. EZe gits on fine without any o that in hisn. Work aint his Find. Its a pleasin sight to see him lyin round t h a to the post-office an the boys a-waitin on to him, doin liis t, radin for him, an sortin the mail when it comes in. Theyre ready enough to do it jest to hear him gas. And so they were. About eight years before the time the present story commences, he had appeared upon the scene apparently having no object in view but to make himself as comfortable as possible...