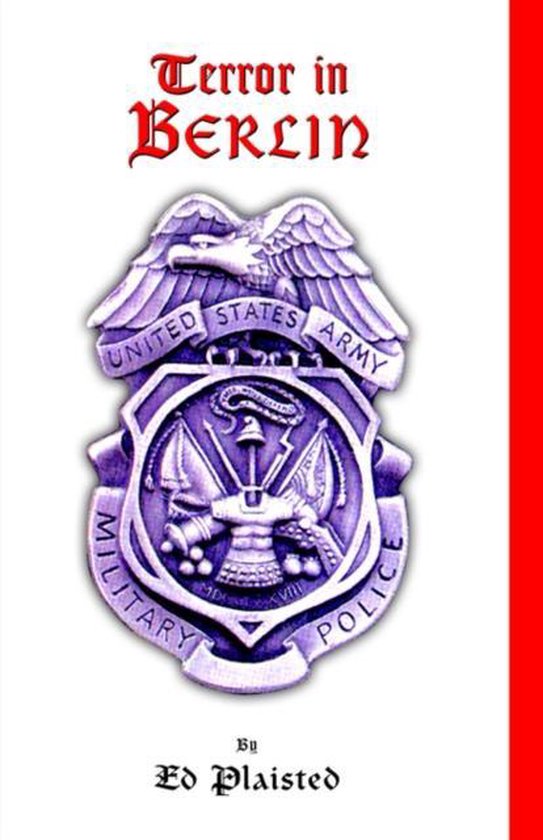 TERROR IN BERLIN By Ed Plaisted In World War II London on December 24, 1943, a English socialite while parked in a lovers lane with an Army Air Corps captain is murdered and sodomized by an American GI in a military police uniform . When Metro police police capture him, they learn that he is Karl Krueger, and is suspected of many such crimes. Fleet Street tabloids call him the sex beast. Prime Minister Winston Churchill reads about Krueger as German bombs continue to destroy his city. He wonders how interested members of the Nazi high-command would be in winning the war if their women and children were the sex beasts next victim. A short time later, MI6 Captain Winston Smythe is relegated the duty of training six criminals for a secret mission. Largely made up of sex offenders, including Krueger, the men are to be dropped into Berlin to rape and murder wives, girl friends and children of the Nazi elite. While four of the men begin to strike terror in Berlin, the other two, IRA man Colin MacAteer and Mafia hit man Anthony Costello, take different routes. MacAteer ingratiates himself with the Nazis while Costello returns to what he knows best the black market. Kruegers first victims are the wife and oldest daughter of Prussian general Siegfried Henrici. He is unaware that Henricis nine-year-old daughter, Margit, witnesses the entire crime from under her mothers bed. Margit tells her story to Berlin police inspector Helmut Hessler and goes to live with her aunt. Soon the Red Army storms into Berlin, wreaking more havoc than the small squad of criminals, raping and murdering women at will. Margit and her aunt narrowly escape such a fate themselves when Smythe, working in Berlin on intelligence and smitten by the aunts beauty, offers her a job and a place to live. Their relationship lasts through the post-war years until Smythe returns to London. Margit grows up and goes to England as well to earn a journalism degree from Cambridge. Smythe is able to locate her fathers millions tucked away in Swiss bank accounts, leaving her well provided for. Thomas Kelly grows up in South Boston, far from the horrors of World War II. After football puts him through college in 1960, Tom is called to active duty from his ROTC status and assigned to serve as a military police officer in Berlin. Tom hopes to some day be a lawyer and judge. As soon as Tom gets to Berlin, a rash of murder-rapes breaks out in the British and American sectors. He meets Helmut Hessler, who tells him about the murder-rapes that occurred during the war. While Tom tries to understand the connection between crimes that shared the same MO but could not have been perpetrated by the same people, CIA and MI6 agents move in to cover up an embarrassing WW II mess. They agree that each criminal must be terminated before speaking to the MPs about their 1944 mission. Tom meets Margit when she comes to his office asking questions about the murders. Margit is now a reporter for the Berlin Morgenpost and a great beauty. Soon Tom and Margit are dating. Margit eventually tells Tom the horrible story about the deaths of her mother and sister and about her father, a Wehrmacht general. who is wasting away in an Soviet labor camp. Tom and Margit soon become aware that there is more to these crimes than meets the eye. When CIA and MI6 operatives realize that Tom and Margit are starting to piece together the story, they try to have them terminated. The couple can trust only the old German captain and an African American MP sergeant. Meanwhile the East Germans decide to construct the Berlin Wall. Can Tom and Margit prevail against all odds that include Washington, London and Moscow? TERROR IN BERLIN is a realistic historic thriller of 97,000 words.