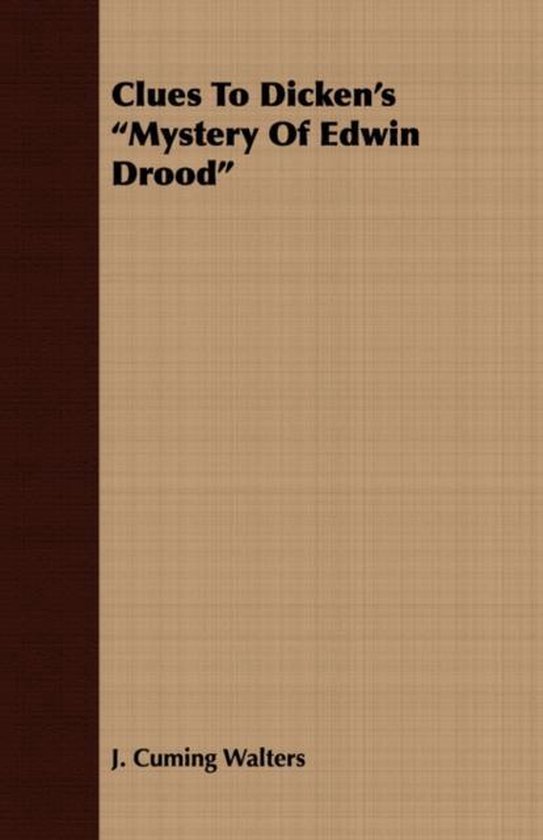 To anticipate and to meet the criticism that so large a volume is not warranted by the subject, it may be urged that not only has an endeavour been made to elucidate the series of mysteries in Edwin Drood, but other solutions have been examined, and Dickenss methods of work analysed. The object has been so to arrange the arguments that they lead to one irresistible conclusion, and it is only by such a process that the truth is likely to be elicited. Those who begin with a theory may find passages to support it but in this instance the essential passages are found first and then made to yield their secret. As it is so long since a serious attempt was made to uplift or to penetrate the veil which Dickens had cast over Edwin Drood one more attempt, on entirely new lines, may not be deemed unworthy of notice. A completion of the story is not offered. Here are only clues which may justly and with a good object be seized upon in the endeavour to understand and to arrive at the inner design of a labyrinthine plot. Tot homines, quot sententiae. CHARLES DICKENS A very curious and new idea . . . not a communicable one, though difficult to work. LONGFELLOW Certainly one of his most beautiful works, if not the most beautiful of all. AN EMINENT NOVELIST Far below what Dickens had before written. R. A. PROCTOR Far above the average of his other writings. GEORGE GISSING Edwin Droods paltry mystery ... I cannot believe that we lost much by the non-completion. ANDREW LANG to be. The plot is more of a mystery than it seemed F. T. MARZIALS A good novel unquestionably. As for the mystery, I do not think that need baffle us altogether . . We need have no difficulty in working out its conclusion. HAINFRISWELL The work did not promise to be very good. T. FOSTER We have no direct indications of the end towards which the story was to tend. W. R. HUGHES An exquisite fragment . unsolved. A. W. WARD . . the mystery still It must be allowed that few plots have ever been more effectively laid than this, of which the untying will never be known. CHAPTER. CONTENTS. I. THE HALF-TOLD TALE AND THE METHOD OF TELLING II. THE STORY ANALYSED - - - - - - y III. THE FIRST MYSTERY-. DEAD OR ALIVE - - IV. THE SECOND MYSTERY MR. DATCHERY - V. MR. DATCHERY BY DEDUCTION VI. THE DATCHERY PROOFS - VII. THE THIRD MYSTERY THE OPIUM WOMAN - PAGE. VIII. FROM CLUE TO CONCLUSION 97 ILLUSTRATIONS. THE GATEHOUSE OF CATHEDRAL CLOSE, CLOISTERHAM - - 1 3 23 31 45 61 73 87 PAGE. Opposite 16 FACSIMILE OF CHARLES COLLINSS COVER TO EDWIN DROOD Opposite 105