Psychoanalysis For Teachers And Parents 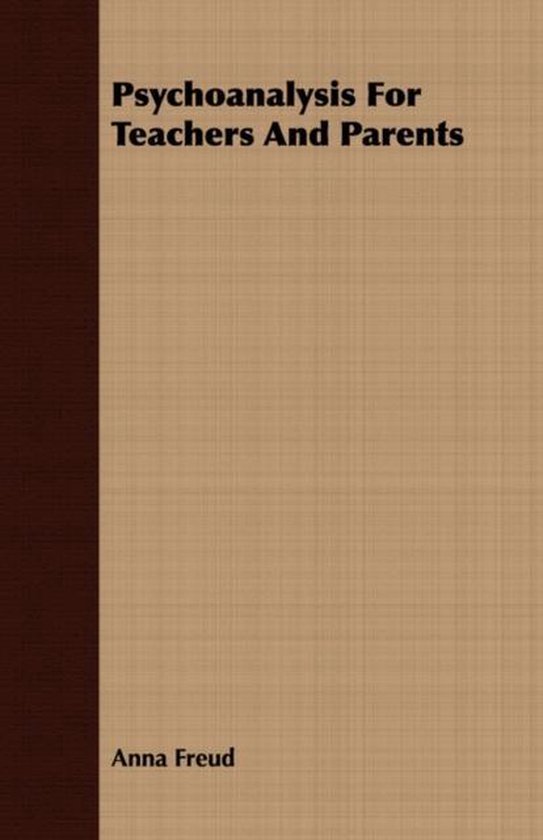 PSYCHOANALYSIS for Teachers and Parents INTRODUCTORY LECTURES BY ANNA FREUD TRANSLATED BY BARBARA LOW AUTHOR OF PSYCHOANALYSIS AN OUTLINE OF THE FREUDIAN THEORY BEACON PRESS Beacon Hill BOSTON These four lectures were given be fore the teachers at the Childrens Centers of the City of Vienna. Contents LECTURE I Infantile Amnesia and the Oedipus Complex n LECTURE II The Infantile Instinct-Life 40 LECTURE III The Latency Period 64 LECTURE IV The Relation Between Psychoanalysis and Pedagogy 92 Index 115 PSYCHOANALYSIS for Teachers and Parents LECTURE I Infantile Amnesia and the Oedipus Complex We are all aware that practical teachers are still very suspicious and doubtful of psycho analysis. When, therefore, in spite of this, you Hort teachers of Vienna determined to have a short course of lectures from me, you must somehow or other have received the impres sion that a closer acquaintance with this new science might be able to afford you some help The word Hort has been left in German, as it appears likely to mislead if an English substitute were attempted. A quotation from an account of a Hort has been included by way of explanation The Hort is a kind of kindergarten, but particularly for children from six to fourteen years of age. The kindergarten itself only takes children up to six years or until school age. The children who come to the Hort are the children of parents who go out to work. They come daily and return to their parents in the evening. Here, in the Hort, they prepare their school homework, occupy themselves with light work or communal games, and are taken for outings by the Hort workers. 12 PSYCHOANALYSIS FOR TEACHERS in your difficult work. After you have listened to thefour lectures you will be able to decide whether you were very wide of the mark in this supposition, or whether I have been able to fulfill at least some of your expectations. In one particular direction I have certainly nothing new to oiler you. I should fail in my object if I attempted to tell you anything about the behavior of schoolchildren and children of these centers, since you are in this respect in a most advantageous position. An immense amount of material passes through your hands in your daily work, and teaches you to rec ognize very clearly the whole range of the phenomena before you from the physically and mentally retarded children, the obstinate, cowed, lying and ill-treated children, to the brutal, aggressive and delinquent ones. It is better not to attempt to give you a complete list, for you might well point out to me a large number of omissions. But the very situation that gives you such a complete knowledge of these phenomena has its drawbacks. You are obliged, as the educa tors of the children of these Horts just as you INFANTILE AMNESIA lg were as teachers In the schools and In the kindergarten ceaselessly to act. The life and movement In your classes or groups demand constant interference on your part you are obliged to admonish, discipline, keep in or der, employ, advise, and instruct the children. The authorities above you would be greatly dissatisfied if it suddenly occurred to you to withdraw to the position of a passive observer. Thus it comes about that in the practice of your profession you become acquainted with numberless visible manifestations of childish behavior, but you are unable to arrange sys tematically the phenomena before your eyes, nor can youtrace to their original source the manifestations of the children on whom, how ever, you are bound to react. Perhaps even more than the opportunity for undisturbed observation you lack the power to make a right classification and ex planation of the material you possess, for such a classification demands very special knowl edge. Let us assume for the moment that one of you among my audience is specially inter ested in finding out why certain children in 14 PSYCHOANALYSIS FOR TEACHERS a particular group suffer from Inflamed eyes or rickets...