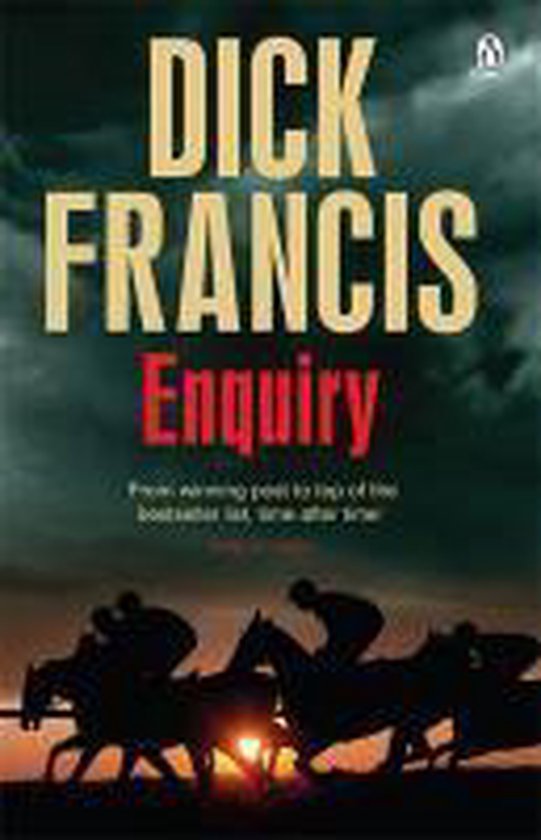 Enquiry is a classic novel from Dick Francis, one of the greatest thriller writers of all time. When Kelly Hughes rides the favourite into second place, he gets penalized for his trouble. Not only has he lost the race, but also his licence, as the Jockey Club suspends him - believing he threw the race. Only he knows that the problem lay with the horse's performance, not his own. Suspecting he was framed, Kelly sets about finding out how it was done, and then who might have done it. But the closer he gets to the perpetrators, the more danger he finds himself in. Now there's more than his reputation and career at stake. There's also his life . . . Packed with intrigue and hair-raising suspense, Enquiry is just one of the many blockbuster thrillers from legendary crime writer Dick Francis. Other novels include the huge bestsellers Dead Heat, Under Orders and Silks. The Dick Francis legacy continues through his son Felix Francis: Refusal is his latest novel, following Bloodline and Gamble. Praise for the Dick Francis novels: 'The narrative is brisk and gripping and the background researched with care . . . the entire story is a pleasure to relish' Scotsman 'Dick Francis's fiction has a secret ingredient - his inimitable knack of grabbing the reader's attention on page one and holding it tight until the very end' Sunday Telegraph 'Still the master' Racing Post 'The master of suspense and intrigue' Country Life Dick Francis was one of the most successful post-war National Hunt jockeys. The winner of over 350 races, he was champion jockey in 1953/1954 and rode for HM Queen Elizabeth, the Queen Mother, most famously on Devon Loch in the 1956 Grand National. On his retirement from the saddle, he published his autobiography, The Sport of Queens, before going on to write forty-three bestselling novels, a volume of short stories (Field of 13), and the biography of Lester Piggott. Dick Francis died in February, 2010, at the age of 89, but he remains one of the greatest thriller writers of all time.