An ACT for Punishing Mutiny and Desertion, and False Musters, and for the Better Payment of the Army and Quarters. 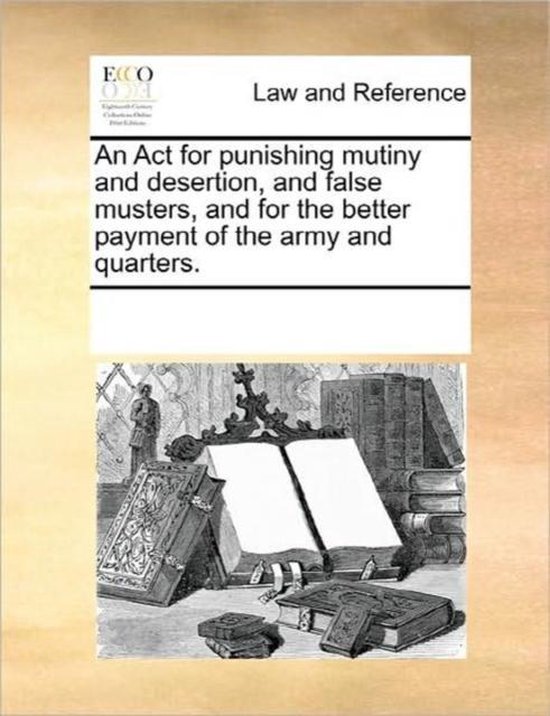 The 18th century was a wealth of knowledge, exploration and rapidly growing technology and expanding record-keeping made possible by advances in the printing press. In its determination to preserve the century of revolution, Gale initiated a revolution of its own: digitization of epic proportions to preserve these invaluable works in the largest archive of its kind. Now for the first time these high-quality digital copies of original 18th century manuscripts are available in print, making them highly accessible to libraries, undergraduate students, and independent scholars.This collection reveals the history of English common law and Empire law in a vastly changing world of British expansion. Dominating the legal field is the Commentaries of the Law of England by Sir William Blackstone, which first appeared in 1765. Reference works such as almanacs and catalogues continue to educate us by revealing the day-to-day workings of society.++++The below data was compiled from various identification fields in the bibliographic record of this title. This data is provided as an additional tool in helping to insure edition identification: ++++Bodleian Library (Oxford)N051178At head of drop-head title: 'Anno septimo Annae Reginae.' - Text in black letter. Last word of first line of text: 'Stand-'; first word of line below initial: 'bation'. Issued separately with a general titlepage, and also as part of: 'Anno Regni Annae Reginae .. septimo. At the Parliament summoned .. the eighth day of July, anno Dom. 1708. .. And .. begun and holden on the sixteenth day of November, 1708. being the first session of this present Parliament.' - Imprint from general titlepage. Text of general titlepage may vary slightly. London: printed by Charles Bill, and the executrix of Thomas Newcomb, deceas'd; printers to the Queens most excellent Majesty, 1709]. 2],111-134p.