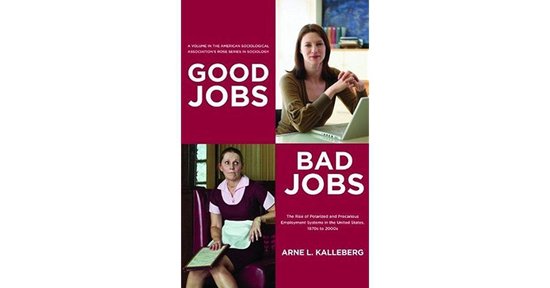 The economic boom of the 1990s veiled a grim reality: in addition to the growing gap between rich and poor, the gap between good and bad quality jobs was also expanding. The postwar prosperity of the mid-twentieth century had enabled millions of American workers to join the middle class, but as author Arne L. Kalleberg shows, by the 1970s this upward movement had slowed, in part due to the steady disappearance of secure, well-paying industrial jobs. Ever since, precarious employment has been on the risepaying low wages, offering few benefits, and with virtually no long-term security. Today, the polarization between workers with higher skill levels and those with low skills and low wages is more entrenched than ever. Good Jobs, Bad Jobs traces this trend to large-scale transformations in the American labor market and the changing demographics of low-wage workers. Kalleberg draws on nearly four decades of survey data, as well as his own research, to evaluate trends in U.S. job quality and suggest ways to improve American labor market practices and social policies. Good Jobs, Bad Jobs provides an insightful analysis of how and why precarious employment is gaining ground in the labor market and the role these developments have played in the decline of the middle class. Kalleberg shows that by the 1970s, government deregulation, global competition, and the rise of the service sector gained traction, while institutional protections for workerssuch as unions and minimum-wage legislationweakened. Together, these forces marked the end of postwar security for American workers. The composition of the labor force also changed significantly; the number of dual-earner families increased, as did the share of the workforce comprised of women, non-white, and immigrant workers. Of these groups, blacks, Latinos, and immigrants remain concentrated in the most precarious and low-quality jobs, with educational attainment being the leading indicator of who will earn the highest wages and experience the most job security and highest levels of autonomy and control over their jobs and schedules. Kalleberg demonstrates, however, that building a better safety netincreasing government responsibility for worker health care and retirement, as well as strengthening unionscan go a long way toward redressing the effects of todays volatile labor market. There is every reason to expect that the growth of precarious jobswhich already make up a significant share of the American job marketwill continue. Good Jobs, Bad Jobs deftly shows that the decline in U.S. job quality is not the result of fluctuations in the business cycle, but rather the result of economic restructuring and the disappearance of institutional protections for workers. Only government, employers and labor working together on long-term strategiesincluding an expanded safety net, strengthened legal protections, and better training opportunitiescan help reverse this trend. A Volume in the American Sociological Associations Rose Series in Sociology.