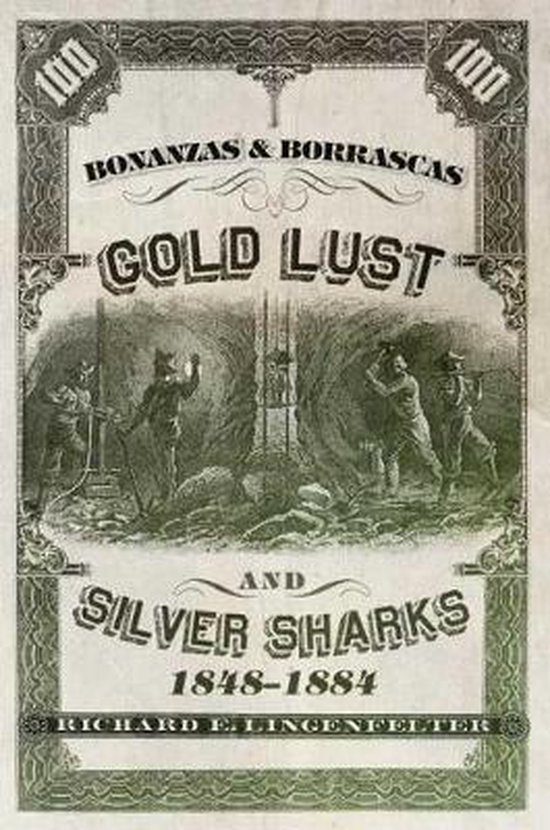 The first of a two-volume study of the heyday of gold, silver, and copper mining in the American West is unique in both scope and approach. Here is a saga of mines and money, of the richly profitable bonanzas and crushingly profitless borrascas of the West. Richard E. Lingenfelter describes how miners, managers, investors, and speculators produced enormous wealthspurring the American economy, attracting myriads of Argonauts and settlers, and transforming the West and the nation.

This tale of great expectations follows the money from rich pockets of ore and the bulging pockets of investors and speculators through mills, smelters, and stock markets. Some of the greatest stockholder losses came from insider looting and market manipulation.Bonanzas & Borrascas ties together the fortunes of East and West by exploring the impact of eastern investors and speculators on western mines, as well as the generally unrecognized impact of the western mines on Wall Street and Washington, D.C. The cast of characters includes an array of financial, political, and cultural icons ranging from Hearst, Guggenheim, Baruch, and Hoover to Fremont, Edison, and Twain.

Gold Lust and Silver Sharks, 18481884 moves from the early years when western investors and speculators dominated both the mines and the markets, to the early 1880s, after San Franciscos mining sharks were driven to New York. The companion volume,Copper Kings and Stock Frenzies, 18851918, begins with that watershed and reveals how easterners bought control of most of the large mines to further exploit eastern markets for even bigger profits and losses. At the same time, developing technology opened ever greater deposits of lower-grade ore in the West, and copper became the leading metal as the electrification of the nation drove up demand and prices.

Both volumes are illustrated with stock certificates of many of the companies discussed. The stories Lingenfelter tells of past speculative bubbles and fraud illuminate the speculative greed of the present and remind us that where a lot of money is involved, things are seldom as they seem.