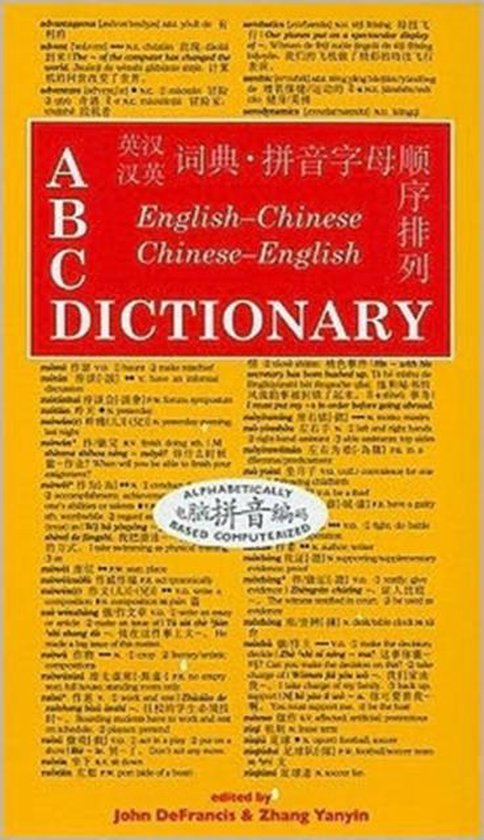 The ABC English-Chinese, Chinese-English Dictionary (ECCE) is a student-oriented bilingual dictionary that, like other dictionaries in the ABC series, organizes Chinese words by their pronunciation as written in pinyin. This innovative, straightforward alphabetical organization allows the user to find most words more quickly and easily. It also facilitates the comparison of words that are pronounced similarly or identically, which is not possible in traditionally-ordered dictionaries. The series' alphabetical ordering has been imitated in other dictionaries, but ECCE is still unique in that it offers detailed and authoritative coverage of grammar (parts of speech, constructions, and examples) and orthography (both simplified and complex characters as well as pinyin). ECCE contains 67,633 entries: 29,670 in the English-Chinese section, 37,963 in the Chinese-English section. The latter is an abridgment of the massive ABC Chinese-English Comprehensive Dictionary, with improvements such as more example sentences, the inclusion of both pinyin and characters for all sentences, and indications of vocabulary grade levels to help learners prioritize their studies by indicating the most basic and important entries. The addition of an entirely new English-Chinese section makes ECCE the ideal portable reference. As in the Comprehensive dictionary, two indexes (Stroke and Radical) assist in looking up a character when its shape is known but not its pronunciation. The rich and encyclopaedic scope of information provided makes the ABC English-Chinese, Chinese-English Dictionary an especially useful resource for both language learners and professionals alike. The dictionary is a handy 4.5 x 7.5 inches with a plastic flexcover.