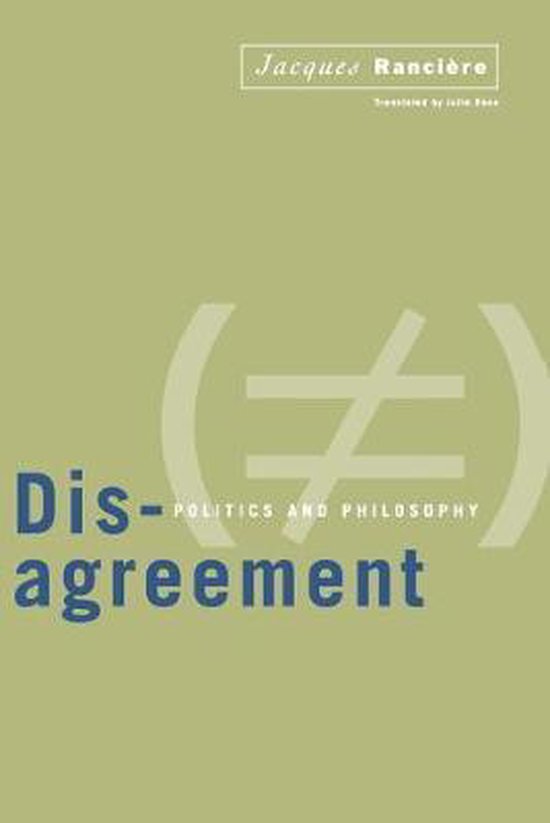 Is there any such thing as political philosophy? So begins this provocative book by one of the foremost figures in Continental thought. Here, Jacques Ranci re brings a new and highly useful set of terms to the vexed debate about political effectiveness and the end of politics. What precisely is at stake in the relationship between philosophy and the adjective political ? In Disagreement, Ranci re explores the apparent contradiction between these terms and reveals the uneasy meaning of their union in the phrase political philosophy --a juncture related to age-old attempts in philosophy to answer Plato's devaluing of politics as a democratic egalitarian process. According to Ranci re, the phrase also expresses the paradox of politics itself: the absence of a proper foundation. Politics, he argues, begins when the demos (the excessive or unrepresented part of society) seeks to disrupt the order of domination and distribution of goods naturalized by police and legal institutions. In addition, the notion of equality operates as a game of contestation that constantly substitutes litigation for political action and community. This game, Ranci re maintains, operates by a primary logic of misunderstanding. In turn, political philosophy has always tried to substitute the politics of truth for the politics of appearances. Disagreement investigates the various transformations of this regime of truth and their effects on practical politics. Ranci re then distinguishes what we mean by democracy from the practices of a consensual system in order to unravel the ramifications of the fashionable phrase the end of politics. His conclusions will be of interest to readers concerned with political questions from the broadest to the most specific and local.