Twilight of the Republic 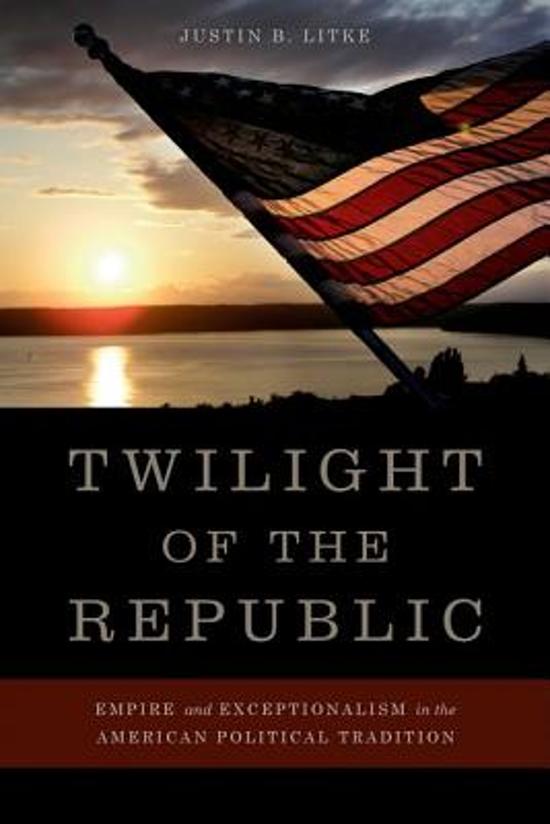 The uniqueness of America has been alternately celebrated and panned, emphasized and denied, for most of the country's history - both by its own people and by visitors and observers from around the world. The idea of American exceptionalism tends to provoke strong feelings, but few are aware of the term's origins or understand its true meaning. Understanding the roots and consequences of America's uniqueness requires a thorough look into the nation's history and Americans' ideas about themselves. Through a masterful analysis of important texts and key documents, Justin B. Litke investigates the symbols that have defined American identity since the colonial era. From the time of the country's founding, the people of the United States have viewed themselves as citizens of a nation blessed by God, and they accordingly sought to serve as an example to others. Litke argues that as the republic developed, Americans came to perceive their country as an active redeemer nation, responsible for liberating the world from its failings. He introduces and contextualizes the various historical and academic claims about American exceptionalism and offers an original approach to understanding this phenomenon. Today, American historians and politicians still debate the meaning of exceptionalism. Advocates of exceptionalism are often perceived by their opponents as unrealistically patriotic, and Litke's historically and theoretically rich inquiry attempts to reconcile these political and cultural tensions. Republicans of every age have recognized that a people cut off from their history will not long persist in self-government. Twilight of the Republic aims to reinvigorate the tradition that once caused people the world over to envy the American political order.